SEJONG, June 5 (Yonhap) -- South Korea has some room for a tax hike in the future, the finance minister nominee said Monday, lending support to the government's expansionary fiscal policies to create jobs and boost the economy.

"South Korea can afford a tax increase, as it has a lower ratio of tax burden to the gross domestic product (GDP) than other member countries of the Organization for Economic Cooperation and Development (OECD)," incoming Finance Minister Kim Dong-yeon said in a report submitted to the parliament before his confirmation hearing slated for Wednesday. "But I think it should be more prudent to actually increase the tax rates at large."

On the campaign trail, President Moon Jae-in promised to focus more on job creation and expanding welfare for young people. In particular, he said his government will create some 800,000 public jobs during his five-year term, grant an allowance to young jobseekers and offer public residence to newlyweds at lower rent.

He hinted at a hike in corporate and income taxes, and a removal of tax exemptions and benefits to secure funds over the next five years.

As a first step, his government drew up an 11.2 trillion-won extra budget Monday to create jobs and give subsidies to young jobseekers.

For corporate taxes, the finance minister nominee said he will not increase the rate immediately.

"I will try to reduce corporate tax-cut benefits and raise effective tax rates in the first place," he said. "A careful approach is needed in terms of increasing corporate taxes."

Currently, South Korea imposes a 22 percent corporate tax on companies that post taxable earnings of over 20 billion won, with 20 percent for firms with 200 million won-20 billion won in earnings.

Also Monday, Kim said in the report that he will push forward with the implementation of the law that imposes income taxes on clergy members starting next year as scheduled.

"The government will take due procedures, including holding public hearings, before the law goes into effect," he said.

The long-controversial bill is set to take effect in January 2018 as part of the government-led efforts to establish equal taxation. Religious figures have been exempted from paying income taxes for decades, given that their work is regarded as a spiritual service, not labor.

But the dispute has emerged again as Kim Jin-pyo, the head of a presidential advisory panel, suggested putting off its implementation for two years. 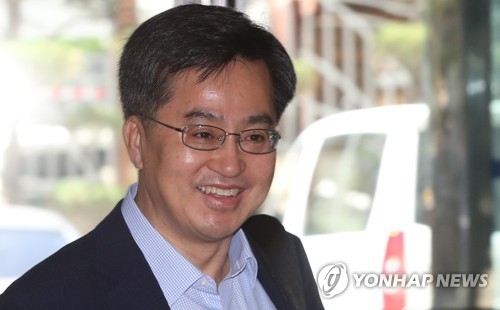