(ATTN: UPDATES with T.O.P.'s reaction in para 6, more background in para 7 and photo)

SEOUL, June 5 (Yonhap) -- Popular singer and actor T.O.P of boy band BIGBANG has been indicted without detention on charges of smoking marijuana, the prosecution said Monday.

Choi Seung-hyun -- his real name -- is suspected of smoking the banned substance four times with a 21-year-old would-be singer, only identified by her surname Han, at his home in Seoul in October last year, according to the Seoul Central District Prosecutors' Office.

He is accused of smoking marijuana joints twice and inhaling it through an e-cigarette on two other occasions.

He has admitted to using the illegal drug only in the first two accounts and denied having smoked the substance in liquid form.

The 29-year-old rapper will immediately be removed from his current position as a conscripted policeman at the Gangnam Police Station in Seoul, where he's been performing his mandatory military service since February, as soon as his arraignment is delivered from the prosecution, the police said.

Choi in his blue uniform left the police station around 6:00 p.m. to be transferred to a different police corps. He quickly got into a vehicle without saying a word to reporters.

His military service period is to be put on hold until a court reaches a verdict. If he receives a jail term of 18 months or more, he will be dishonorably discharged from service. In case of a lighter ruling, the police will decide whether to allow him to keep his post or transfer him to a different position.

The use of marijuana is banned in South Korea and could be punished with a maximum of five years in prison or a fine of up to 50 million won (US$44,730).

He was initially under probe by police. While looking into Han's drug abuse suspicions in March, police raided Choi's home to secure evidence. He tested positive for the drug, according to police. Police referred his case to the prosecution in April.

During the police interrogation, T.O.P denied the allegations, saying he only smoked electronic cigarettes, they said. His accomplice, meanwhile, is known to have admitted to suspicions raised against her. 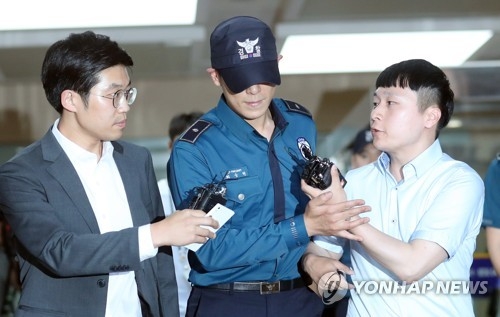