SEOUL, June 5 (Yonhap) -- A South Korean civic group said Monday that it will delay shipments of aid supplies to North Korea and its plan to visit North Korea as Pyongyang took issue with U.N. sanctions against the North.

The Korean Sharing Movement is preparing to send pesticide and medical supplies to fight Malaria to North Korea as the government has decided to flexibly resume inter-Korean exchanges.

Kang Young-sik, the secretary-general of the group, said that Pyongyang took issue with the South Korean government's attitude toward the latest adoption of U.N. sanctions against the North.

"We've decided to put off our plans to deliver the supplies' shipments and to visit North Korea for cooperation," Kang said.

If the North accepted the Korean Sharing Movement's shipments, it could have become the first local civic group to provide humanitarian assistance to the North since January 2016.

A ministry official said the government has no comment on North Korea's latest rejection.

Meanwhile, a local civic group to seek a joint summit anniversary event slated for June 15 remains divided over the venue with its North Korean counterpart.

The South's part is hoping to hold the event in the North Korean border city of Kaesong, but the North's side reportedly insists that it should be held in Pyongyang.

The ministry cast a prudent stance over whether it will approve the South group's visit, saying that it will take into account the event's purpose, inter-Korean relations and the international environment. 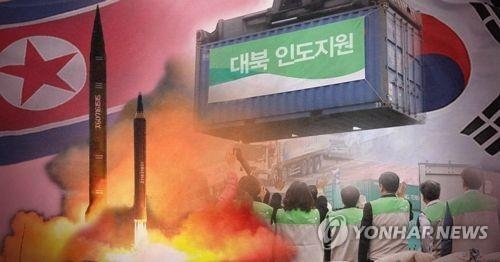