The Ministry of Agriculture, Food and Rural Affairs said tests showed the virus that hit a poultry farm with seven chickens was confirmed to be the H5N8 subtype.

The farm reported to the authorities after five Korean Ogol Chickens it purchased from a traditional market in Gunsan in the country's southwestern region last month all died. Three other chickens it originally had also died.

Some 3,600 out of 6,900 chickens from the Gunsan farm have been sold throughout the country, according to the ministry.

On Sunday, a poultry farm with some 6,000 birds in the southern port city of Busan tested positive for the flu. The farm had purchased 650 Korean Ogol Chickens in Gunsan.

Up till Sunday, poultry from Gunsan was sold to eight cities and counties including Busan, Jeju, Paju and Yangsan. A total of 31,913 chickens from 18 related farms have been culled so far, regardless of their test results.

The ministry is restricting movement in the area to contain further outbreaks.

Meanwhile, South Korean health authorities said that there is very low risk that the avian influenza virus strain in the country will infect humans. South Korea has yet to report any human infection by the flu. 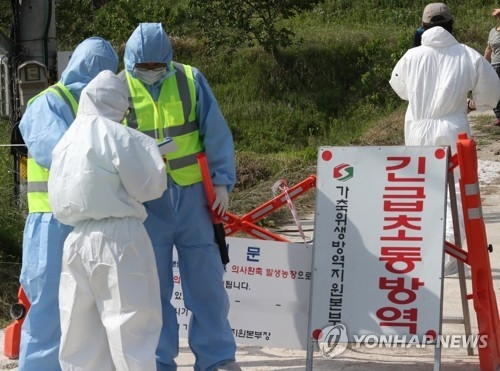