BEIJING, June 5 (Yonhap) -- Chinese police believe the Chinese driver of a school bus held responsible for a fatal bus fire that killed 11 children and a teacher last month posed as a victim in an apparent attempt to claim damages, diplomatic sources said Monday.

The Shandong provincial police agency shared their belief with the bereaved families of the victims on Sunday when they briefed them on the completion of their investigation into the cause of the incident.

On Friday, the Chinese government said the driver, Cong Weizi, set alight a bus carrying 11 kindergarten students and a teacher inside the Taojiakuang Tunnel in Weihai, a city in the eastern Chinese province of Shandong, on May 9. Ten of the kindergarteners were South Korean.

The Shandong provincial police agency has told a press conference at a Weihai hotel that Cong bought a lighter and gas, stashed them in the bus, and lit it all on the day of the bus fire, one day after he was dissatisfied because the school gave him a dismissal notice.

In the arson attack that also killed Cong, he was found dead in the aisle of the bus, not in the driver's seat, causing the local police to believe that Cong was putting on a show of trying to rescue the children at the time of the fire, they said.

The local police are also quoted as saying the driver chose to commit the act of arson during the rush hour, making it difficult for firefighting authorities to come to the scene so that they would be kept in the dark about the cause of the incident. 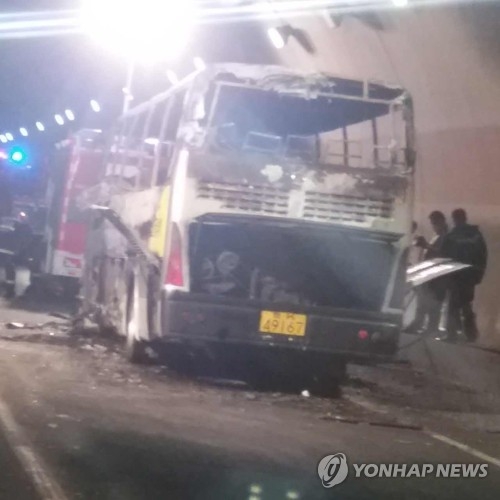 Cong is also accused of having switched to low gear rather than the neutral gear that most drivers would choose in an emergency. Cong's switch to low gear is suspected as being done to keep the victims from evacuating the bus.

The local police believe that Cong pretended to act like a victim just to get damages from the incident.

The bereaved family members of the killed children have accepted the investigation results following two rounds of explanations the police gave about the incident, paving the way for the Chinese authorities to engage in negotiations with the bereaved families of the victims on how to hold funerals and give them compensation.

The South Korean consulate general in Qingdao said it will support the families in the compensation talks by contacting the Chinese government and the Shangdong regional government.