Outbound shipments of dried laver came to US$218 million in the January-May period, according to the data compiled by the Ministry of Oceans and Fisheries.

Dried laver, called "gim" in Korean, is usually roasted with sesame oil and fine salt to be served as a side dish in Korean dining. Snacks made of gim have gained popularity among foreigners in recent years. 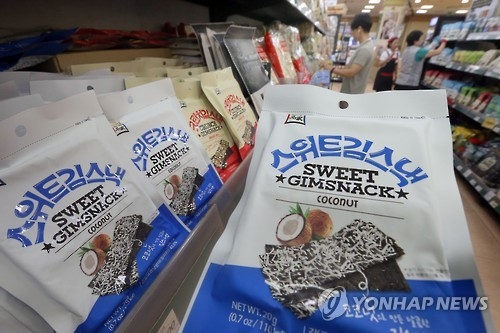 By country, South Korea's exports of dried laver to Japan, China and Thailand rose 73.8 percent, 71.1 percent and 62.1 percent, respectively, during the same period.

South Korea's exports of seafood, including dried laver, came to $913 million in the January-May period, up 14.8 percent from a year earlier.

Exports of dried laver up 58 pct in first five months

Exports of dried laver up 58 pct in first five months