During a three-day visit from Wednesday, he will meet Prime Minister Shinzo Abe and parliament leaders.

Chung is expected to explain the Moon Jae-in administration's policy toward Japan and stress the importance of the two countries' partnership for regional peace. He is also expected to elaborate on the new government's North Korea policy.

During meetings with his counterparts, Chung will urge Japan's participation in a proposed parliamentary dialogue of six countries which were involved in the now-defunct multilateral talks to denuclearize North Korea, according to his office.

The six-term lawmaker will also discuss ways to promote parliamentary exchanges between the two countries.

He is scheduled to meet House of Representatives Speaker Tadamori Oshima and House of Councilors President Chuichi Date as well as Fukushiro Nukaga, chief of the Japan-Korea Parliamentarians' Union.

Chung will be accompanied by seven legislators. 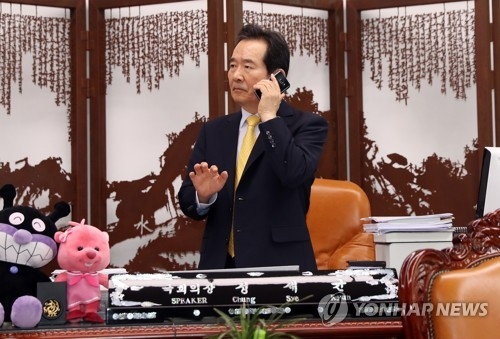