WASHINGTON, June 6 (Yonhap) -- U.S. Secretary of State Rex Tillerson said Tuesday that countries with any type of ties to North Korea should join the U.S. in putting pressure on Pyongyang so as to bring the regime to the negotiating table for denuclearization.

Tillerson made the remark at a joint news conference in Wellington with New Zealand Prime Minister Bill English, stressing that the communist nation should be made to rethink its future because its nuclear and missile programs won't bring what it wants.

"We have called on all nations that have any type of relations, economic activity with North Korea, to join us in putting pressure on the regime in Pyongyang to cause them to rethink the strategy and the pathway they're on with the development of their nuclear weapons program," Tillerson said, according to a transcript provided by the State Department.

"All the regional partners, including China, have reaffirmed without question their commitment to a de-nuclearized Korean Peninsula. And so now I think the question is: How do we work together collectively to bring Pyongyang to the table, to have a discussion about that future, a different future than the one they have charted thus far?"

Pressure is needed to cause the North to pause and really question whether what they think is their future is truly achievable, Tillerson said, adding that the U.S. is very serious about making sure the North won't have "weapons or the means to deploy them against the United States."

"So we had a good conversation about the ways New Zealand can support us in that regard, both in terms of reaffirming that message but then backing it up in whatever small ways are possible to put action behind the message that North Korea needs to change its path," he said.

The Trump administration has been stepping up efforts to rally international support for driving up pressure on the North.

In late April, Tillerson hosted a special ministerial session of the U.N. Security Council and urged U.N. members to suspend or downgrade diplomatic relations with the North and cut off trade ties supporting Pyongyang's illicit activities. 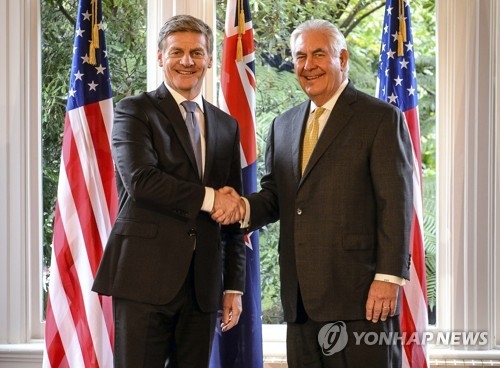 Tillerson calls on all countries to press N. Korea to return to talks

Tillerson calls on all countries to press N. Korea to return to talks