SEOUL, June 7 (Yonhap) -- Different verdicts on two murders have created a public uproar in South Korea since last week, with many raising doubts over whether the sentences on the accused were fair enough to get justice for the victims and their families.

While the two cases may look similar, legal experts here said the perpetrator's intent to kill was what led to the contrasting ruling, which is never to be condoned in a law-abiding society.

An appeals court in Daejeon, south of Seoul, sentenced a 39-year-old man, only identified by his surname Lee, on Thursday to three years in prison for beating his girlfriend to death and burying the body. His sentence was reduced from five years handed down by a lower court.

In another trial, a lower court in North Chungcheong Province sentenced a 46-year-old woman, surnamed Kim, to 10 years in prison Friday for stabbing her daughter's teacher to death after she found out that he had molested her teenage child.

The verdicts instantly sparked a barrage of tweets and comments denouncing the courts for giving a lighter punishment to Lee, who took a life of a woman by violence and buried the body in cement to conceal his crime.

Many of the angry comments blamed the court for accepting Lee's argument that the death was accidental because he couldn't control his anger toward his girlfriend, who wanted to break up with him. 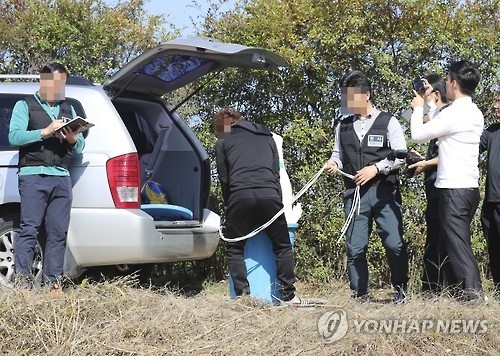 "You call beating someone and pouring cement over the body accidental? Tell me who's more moral, a guy who was caught after four years of hiding or a mother who turned herself in after killing a man who'd harassed her little girl?" Cho Yoon-hee said.

The public outrage has intensified as it turned out that Lee bargained a deal based on a settlement he gave to the victim's estranged father, in return for a promise that he wouldn't seek punishment for Lee.

South Korea has relatively lenient sentencing rules compared with countries like the United States. An involuntary manslaughter starts at a minimum of a three-year sentence, and a homicide can carry up to 30 years in jail.

The public outcry aside, few experts disagreed with the rulings. The vengeful mother has been punished for what she deserved since she personally took the matter into her own hands.

The court dismissed Kim's argument that she had no intention of killing the teacher, as her text messages and purchase of a tool prior to the murder proved it was premeditated.

"A personal revenge accords due punishment although the victim gave the suspect a motive for the crime," the court noted in the ruling.

The prosecution only indicted Lee on a count of negligent homicide because the victim's body was discovered too late to retrieve any compelling evidence against Lee.

"Our justice system provides clemency for criminal negligence. Although it may foment social discord, we cannot but say that the judge has honestly returned a verdict based on evidence," Rho Young-hee, a Seoul-based lawyer, said by phone.

"The prosecutors' job is to prove as objectively as possible with evidence that are admissible by the court. So we can't say that it's their fault that Lee has received a three-year jail term," Rho added.

Still, there were angry comments that blasted the justice system for having failed to bring more charges against Lee and return a verdict "so distant from reality."

"We might as well replace the judges with AlphaGo," a netizen wrote, referring to the artificial intelligence program that became famous in South Korea after it defeated a highly ranked Go player in a five-round match last year.