RAS AL KHAIMAH, United Arab Emirates, June 7 (Yonhap) -- South Korea football coach Uli Stielike will try to get a boost of confidence and find the best combination for a crucial FIFA World Cup qualifier next week when his team faces Iraq in a friendly in the United Arab Emirates on Wednesday.

South Korea will take on Iraq at the 5,200-capacity Emirates Club Stadium in Ras Al Khaimah at 9 p.m. Wednesday (local time), or 2 a.m. Thursday in Seoul. This match is a tune-up for South Korea's upcoming World Cup qualifier against Qatar in Doha next Tuesday.

"We need to adjust to the weather and environment here and play a good game," Stielike said Tuesday. "We can gain confidence when we execute well and get the result that we want." 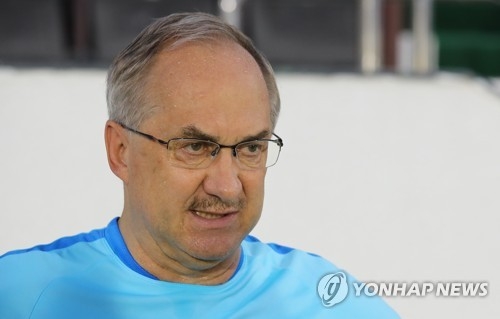 Stielike called up 24 players for their two matches in the Middle East, but he's only had his full squad since Monday because some of the players joined late due to their club duties. The German head coach said that in the friendly against Iraq, he will rest the players who are not fit but will test those who have had little playing time with the national team.

"Players like Lee Chung-yong haven't played many games, so I will watch how they perform," he said of the Crystal Palace midfielder. "We will be able to test which combination and which players will work the best for the World Cup qualifier against Qatar."

Stielike, however, said that doesn't mean his side will play loose against Iraq.

"We will test everything we can since it's a tune-up match," he said. "But it's also important that we secure the ball, finish nicely and show solid defending (against Iraq) to gain confidence."

The Taeguk Warriors were forced to change their travel plans to Doha following a diplomatic rift in the Gulf region that put Qatar in isolation. They were originally scheduled to fly from Dubai to Doha on Saturday, but they will now have to board a connecting flight in Kuwait since the UAE joined other Arab nations, such as Saudi Arabia and Bahrain, in cutting diplomatic relations with Qatar over its alleged support of terrorism, and suspended flights to and from the Qatari capital.

It usually takes about an hour from Dubai to Doha, but the South Korean squad will now have to take a four-hour trip to the Qatari capital. Stielike said his team will not be severely influenced by the situation.

"It's going to affect us a little bit, but I expect there's not going to be a major problem in our schedule," he said.

With three matches remaining in the final Asian qualifying round for the 2018 FIFA World Cup, South Korea are currently in second place, the last automatic qualification spot, in Group A with four wins, one draw and two losses.

In Asia, only the top two from each of the two groups advance straight to the World Cup in Russia, while the two third-place teams have to go through a playoffs for the right to join the other four.

S. Korea football coach looking to get boost of confidence ahead of World Cup qualifier

S. Korea football coach looking to get boost of confidence ahead of World Cup qualifier