SEOUL, June 7 (Yonhap) -- The number of South Korean cinemagoers for the first half of 2017 is expected to reach over 100 million, according to industry observers Wednesday.

The country's box office brought in an accumulated 85.42 million people from Jan. 1 to June 5, according to the Korean Film Council. The figure represents a 5 percent increase from the same period last year.

Given that the average attendance for June stood at 15.7 million from 2013 to 2016, industry experts expect the first-half figure to climb to over 100 million. The previous record high for the first half was 98.5 million back in 2013.

"More people seem to have sought solace in theaters given the tense political situation over the president's removal from office and the ensuing May presidential election," Kim Young-ho, a movie market analyst, said.

The two biggest films so far during the first six months were local ones: "Confidential Assignment" and "The King," which sold 7.82 million and 5.32 million tickets, respectively. 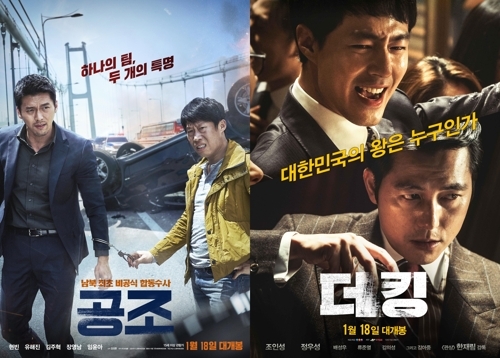 "Beauty and the Beast," a live-action adaptation of Disney's classic animation, came in third, with 5.13 million, followed by the Hollywood action blockbuster "The Fast of the Furious" and the Japanese fantasy animation "Your Name," with 3.65 million and 3.62 million, respectively.

In terms of the audience market share, local films accounted for 44.1 percent, while foreign movies took over 55.9 percent, or more than half of attendance for the fourth-consecutive year.

Number of S. Korean moviegoers to surpass 100 mln in H1

Number of S. Korean moviegoers to surpass 100 mln in H1