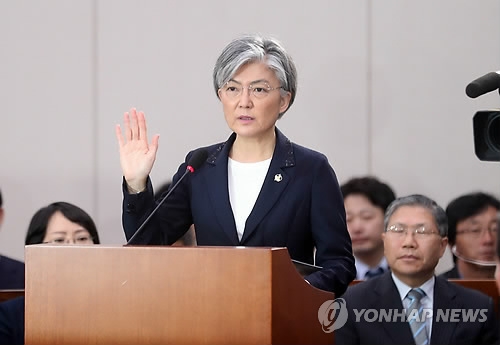 As for a controversial deal signed in 2015 with Japan on the comfort women issue, Kang said that the victims should be at the center for any discussion, saying that she will seek "sincere" measures to be taken through talks with Japan.

Under the deal, Tokyo expressed an apology for its colonial-era atrocities and agreed to contribute 1 billion yen (US$9.97 million) to a foundation dedicated to supporting the surviving victims of sexual slavery.

Critics, however, doubt the sincerity of the apology as Japan refused to recognize its legal responsibility for the forced mobilization of the women.

They also criticized the deal for being hastily arranged without sufficiently seeking the opinions of victims, raising issue with the lack of transparency in the process.

If confirmed, Kang said that she will do her utmost to strengthen communication and make sure there is "procedural legitimacy" in enforcing policies.