By Yoo Jee-ho and Kim Seung-wook

SEOUL, June 7 (Yonhap) -- Jamie Romak, a midseason acquisition for the SK Wyverns in the Korea Baseball Organization (KBO), likes it in South Korea so much that he is hoping for a long stay here.

In just 23 games after replacing Danny Worth, Romak has smacked 11 home runs and knocked in 23 runs. He's a key cog of the home run-hitting machine that is the Wyverns, who are leading the KBO with 99 home runs, a whopping 40 more than anyone else.

Romak might have had a chance to join the big leagues this year, but he chose the KBO because he would be guaranteed playing time here.

As far as the success in the KBO leading to a new opportunity in the majors, Eric Thames comes to mind. After winning an MVP award during his three seasons here, Thames signed with the Milwaukee Brewers last winter and is among the National League leaders in home runs this year. 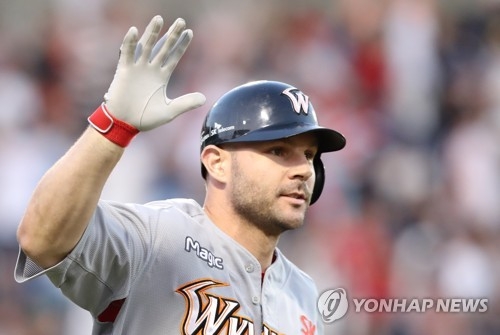 But Romak, who has played in 27 big league games with the Los Angeles Dodgers and the Arizona Diamondbacks, is plenty happy where he is now.

"Everyone always talks about, 'Oh, if you play well, you can go back to the States,'" he said. "Since it's a good family life here, I'd love to stay here. I'll be happy to play well enough so that the team would like for me to come back."

Romak is here with his wife and a six-month-old son. They're living in an apartment in the hippy Songdo area, not too far from the Wyverns' home park, and the transition has been so smooth that Romak said, "I don't notice that big of a difference as to how my day goes, compared to how it went in the States."

And the Wyverns must be happy with what they've seen from Romak so far on the field. And the 31-year-old Canadian, who has also played in Japan, credited the Wyverns' video staff and scouts with helping him along the way.

"Since I've been here, I meet with the video staff and scouts every day, and they give me reports on pitchers and a lot of data," he said. "I have a very good amount of information about these guys even though I've never faced them before. I'm going to know everything about a pitcher before I take my first at-bat."

The 11 home runs put Romak tied for seventh in that department in the KBO, even though he has only played about half as many games as the rest of the leaders. Two SK players, Choi Jeong and Han Dong-min, are at the top with 18 and 17 apiece, and a third SK player, Kim Dong-yub, has 13.

Choi, Han, Kim and Romak have combined for the exact same number of home runs, 59, as the second best home run-hitting team in the league, the Doosan Bears.

Romak shrugged off his hot start to his KBO career as "one of those streaks." 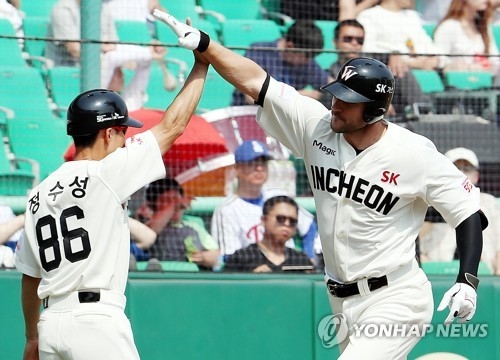 "It just happens all at once. Sometimes, it goes the other way, where you play really bad for a long time, and everyone wants answers. It's such a hard game," he said. "I think the hitting part is contagious. We have a great hitting team. There's no pressure on me. If I don't get a hit today, then probably someone else is going to get a big hit. Even though expectations for foreign guys might be really high, I just enjoy the day and do my best."

And Romak admitted he has had his share of challenges -- namely with the pitchers' ability to change speeds.

"They throw a really slow curve, and then the fastball may only be 140 (kph), but after a slow curve, it feels like 160," he said. "I've been impressed. There have definitely been tough days. I am just staying positive and doing the best I can."

Romak said he hopes to help the Wyverns reach the postseason, a feat they've only achieved once in the past four years.

"My goal in the short term this year is to play every game. If that happens, it means I am in good health, and I am playing well," he said. "When the starting players are playing a lot and are in good health, then we can make the playoffs, for sure."