SEOUL, June 7 (Yonhap) -- Constitutional Court Chief nominee Kim Yi-su apologized Wednesday over the allegation that he was at the forefront of judicial punishments for protesters against the military-backed government in the 1980s.

During his parliamentary confirmation hearing, Kim also vowed to contribute to addressing the country's ideological divide and fostering national cohesion, amid conservatives' criticism of what they call his left-wing streak.

"I sincerely apologize to those who have so far been troubled with my past ruling," he said in his opening remarks. "The May 18 pro-democracy movement (in 1980) was an excruciatingly painful chapter of our history." 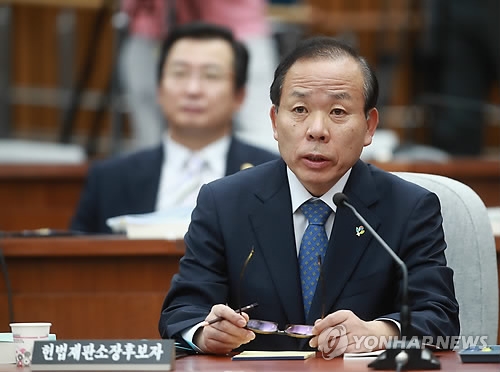 In 1980, Kim, then a military judge, meted out the death penalty to a bus driver who participated in an armed pro-democracy protest in the southwestern city of Gwangju. The bus driver, carrying protesters, plowed into a cordoned-off area, killing four police officers.

The defendant claimed he could not see what was in front of him due to tear gas, but the Supreme Court confirmed the death penalty in 1981. After seventeen years on death row, a retrial exonerated him.

Conservative parties have also taken issue with his view on a 2014 court case. The nominee presented a minority opinion when a nine-member bench of the court disbanded the far-left Unified Progressive Party over its members' pro-North Korean activities.

The main opposition Liberty Korea Party calls Kim unfit for the top court post, which it says should be free from ideological or political bias.

Mindful of such criticism, Kim pledged to play a role to promote national "harmony."

"Polarization, and labor and environmental issues have been escalating into legal disputes," he said. "In the face of such ideological contentions, (I) will pursue the value of harmony."

His official appointment requires consent from a majority of the lawmakers present for the vote set up by a majority of all 299 legislators. The ruling Democratic Party holds 120 parliamentary seats, quite short of a majority.