SEOUL, June 7 (Yonhap) -- The United Nations Security Council (UNSC) seems open to further strengthening sanctions on North Korea if the country continues to fail to respect the council's resolutions, New Zealand's ambassador to Seoul has said, drawing on the experiences of her country's recent two-year seat at the U.N. panel.

Last week, the Security Council adopted its latest sanctions known as Resolution 2356 in its response to North Korea's recent series of ballistic missile launches. It was the U.N. panel's seventh sanctions resolution over North Korea's nuclear and missile threats, adding more North Korean people and entities to a blacklist.

"The last few UNSC resolutions that have been adopted in addressing the issue have made it clear that this is a wider threat than the immediate situation that is a threat to the region. This is a threat globally," New Zealand's Ambassador to South Korea Clare Fearnley said in an interview on the sidelines of the Jeju Forum last week.

"We look forward to a time when because of North Korea's compliance such sanctions will no longer be necessary, but right now, because North Korea continues to fail to respect Security Council rulings, there seems to be no option but to continue the sanctions regime," the ambassador said.

For two years till the end of 2016, New Zealand served as a rotating member of the 15-seat UNSC. Drawing on the experiences, Fearnley said the council is also open to putting more sanctions on North Korea.

"There was different talk about taking additional sanctions as the situation develops. So I look at that (statement) and take it on face value, and that indicates there's openness to strengthening sanctions as the situation requires," she said referring to the council's latest press statement adopted unanimously to condemn North Korea's eight missile tests on May 21.

The statement said the members of the Security Council agreed that they will take further significant measures, including sanctions on North Korea, with determination.

At the same time, she also stressed the role of dialogue in resolving the North Korean nuclear issue.

"I see commonality across a range of speakers. I hear no one saying sanctions are just for sanctions' sake. ... The objective is to bring North Korea back to compliance and back to dialogue," the ambassador said.

"(New Zealand continues) to call for North Korea to comply with UNSC resolutions and to come back to dialogue," she added. 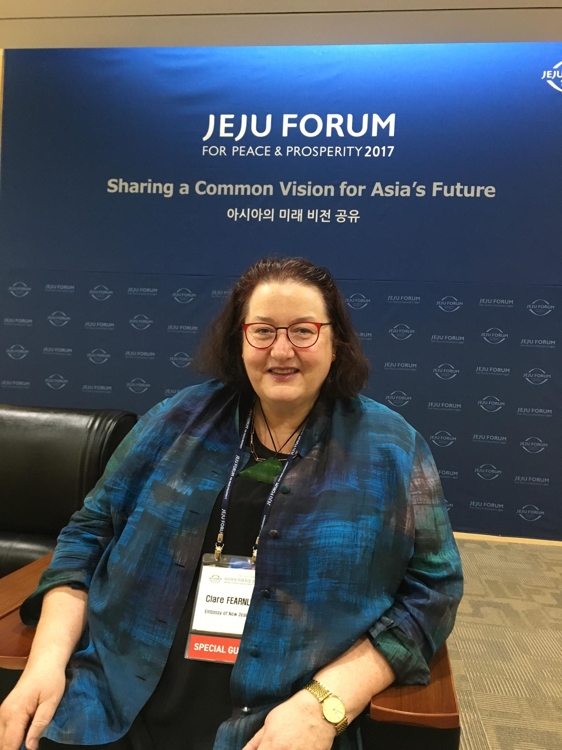 Meanwhile, the ambassador said the Trans-Pacific Partnership, or the TPP regional trade agreement, will move ahead as planned even after the United States recently walked out of the deal.

The TPP originally was a trade deal of 12 countries, including the U.S., Canada, Japan, Singapore and New Zealand, but within several days of taking power in January, American President Donald Trump withdrew the U.S. from the agreement.

"Although the U.S. has recently announced it won't be processing with TPP, just last week (on May 21), trade ministers of TPP 11 (countries) ... met in Vietnam and collectively we are committed to moving ahead and finding a way forward," she said. "TPP 11 continue on with the objective of our leaders who will meet in November in Vietnam again to actually declare a decision around TPP 11's future.

"I think that pressure to integrate, not because it's ideological thing but because it's actually mutually beneficial, continues on," the ambassador said.

With South Korea, New Zealand also sees "commonality of interest," Fearnley said, adding that both of the countries support a rule-based trading system that liberalizes and advances free trade.