"The government has taken steps to have taxation contribute to enhancing distribution of income, but its efforts have failed to meet expectation to some extent," incoming Finance Minister Kim Dong-yeon said in a parliamentary confirmation hearing. "I will seek ways to improve economic fairness through taxation and other means."

Income disparity has been widening in recent years, as the latest data showed that the Gini coefficient of total income of an average household stood at 0.353 in 2016, up from the previous year's 0.341. The Gini coefficient gauges income disparity between the haves and have-nots. A reading of higher numbers nearing 1 indicates a widening gap in earnings between the rich and poor.

Kim added that he will do his best to establish a social and financial reward system in a fairer way to remove illicit practices like tax avoidance.

Also, the finance minister nominee said it is necessary to cultivate a wider tax base as part of the fair taxation principle, referring to the fact that nearly half of salaried workers are not subject to income tax.

His comments are in line with President Moon Jae-in's "income-led growth," focusing on strengthening the government's fiscal role in increasing the income of young people, temporary workers, and small and mid-sized enterprise (SME) employees, and boosting the economy.

Moon's "income-led growth" principle is similar to the concept of inclusive growth, meaning economic growth that creates opportunities for all segments of the population and fairly distributes the dividends of increased prosperity, both in monetary and non-monetary terms, across society.

Kim's one-day confirmation hearing is a mandatory procedure before the president names a Cabinet member, but his appointment does not require parliamentary approval. 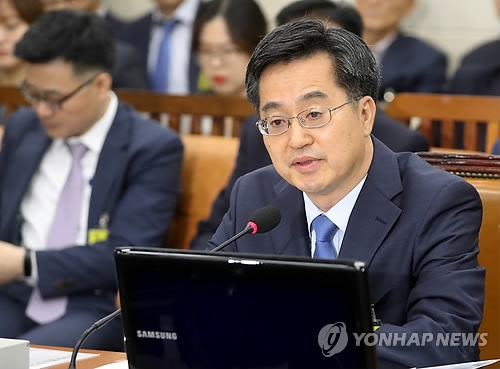