SEOUL, June 7 (Yonhap) -- Two top-ranking prosecution officials will face disciplinary dismissal from office after an internal probe concluded Wednesday that they acted inappropriately by giving cash to their subordinates.

An internal probe team set up by the prosecution and the justice ministry said it has asked the ministry to remove Lee Young-ryeol, former chief of the Seoul Central District Prosecutors' Office, and Ahn Tae-geun, ex-deputy minister for criminal affairs, from office in disciplinary punishment for their ethical lapses.

Lee and Ahn gave cash to their subordinates at a dinner in late April while they were involved in an investigation into a high-profile scandal that led to the ouster of former President Park Geun-hye.

The internal probe team has also requested the prosecution to launch a formal investigation into Lee on suspected violation of the anti-graft law.

The probe result has come in about three weeks after President Moon Jae-in ordered the Ministry of Justice and the Supreme Prosecutors' Office to look into the controversial cash payments.

Lee and Ahn have offered to resign from their posts soon after Moon ordered an internal probe. The president demoted the two to provincial high prosecutors' office posts instead of accepting their resignations. 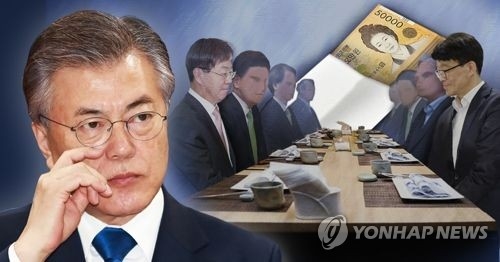 Two prosecution officials to be dismissed for cash offer to underlings

Two prosecution officials to be dismissed for cash offer to underlings