A joint inspection team asked the ministry to dismiss Lee Young-ryeol, former chief of the Seoul Central District Prosecutors' Office, and Ahn Tae-geun, ex-deputy minister for criminal affairs, as punishment for their wrongdoings.

The inspectors also requested the prosecution to launch a formal investigation into Lee on suspected violation of the anti-graft law.

Lee and Ahn had a dinner in late April with their subordinates, including a team of prosecutors who investigated a scandal involving former President Park Geun-hye. The investigators were under fire for failing to dig up suspicions surrounding one of her key aides, who was previously a senior prosecutor.

During the meeting held just after the team concluded the probe, Lee and Ahn offered envelopes with up to 1 million won (US$892) each in them to each other's underlings. Two justice ministry officials who received the cash from Lee returned it the next day.

The ministry's disciplinary committee will convene to review the inspectors' request. The lower-level officials who received the cash will likely be given a disciplinary warning.

The announcement came about three weeks after President Moon Jae-in ordered the Ministry of Justice and the Supreme Prosecutors' Office to look into the incident.

Lee and Ahn offered to resign from their posts soon after Moon issued the order. The president later demoted the two to provincial high prosecutors' office posts instead of accepting their resignations.

Lee and Ahn both claimed earlier that the money was not intended to elicit any favors in return but was a sort of customary incentive.

Lee had been leading the special investigation team in charge of the influence-peddling case involving Park and her longtime friend Choi Soon-sil. Ahn is known to be close to Woo Byung-woo, a former senior aide to Park, who is seen as a key figure in the scandal.

Ahn is suspected to have talked with Woo over the phone frequently while the special investigation was underway.

Woo faces trial without detention on charges of negligence of duty for failing to prevent Choi from interfering in state affairs and extorting tens of billions of won from big firms like Samsung. 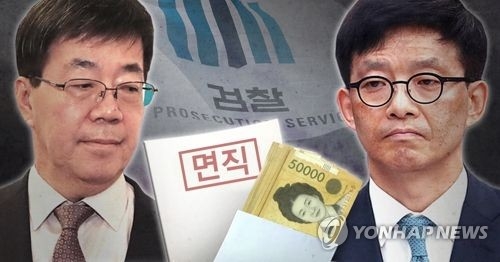