South Korea, led by head coach Uli Stielike, will take on Iraq at the 5,200-capacity Emirates Club Stadium in Ras Al Khaimah at 9 p.m. Wednesday (local time), or 2 a.m. Thursday in Seoul. This match is a tune-up for South Korea's upcoming World Cup qualifier against Qatar in Doha next Tuesday.

Although the Taeguk Warriors are away from home, they will receive avid support from the Akh unit, the South Korean elite forces deployed to the UAE, according to an official from the Korea Football Association (KFA).

The Ahk unit, meaning "brother" in Arabic, has been serving in the UAE since 2011, helping train its UAE counterparts. These troops are also deployed to assist South Koreans in the region in case of emergency.

About 130 troops are with the special forces, and more than half of them are expected to visit the stadium to cheer for South Korea, the KFA official said. They will be also accompanied by 200 South Korean employees at Sheikh Khalifa Specialist Hospital in the city.

Stielike's team will leave the UAE on Saturday, but recently had to change their travel plans. They will arrive in Doha via Kuwait, instead of flying in directly from Dubai to the Qatari capital, because a recent diplomatic rift in the Gulf region forced the shutdown of flight operations between the UAE and Qatar.

The UAE is one of the Arab nations that cut diplomatic ties with Qatar over its alleged support of terrorism. 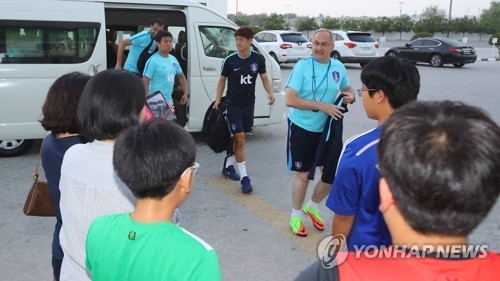 S. Korean special forces in UAE to cheer for nat'l football team in friendly vs. Iraq

S. Korean special forces in UAE to cheer for nat'l football team in friendly vs. Iraq