SEOUL, June 8 (Yonhap) -- In his first 30 days in office, President Moon Jae-in apparently confirmed the people's willingness and desire for a change as seen in their support for what many of his critics have called the sensational or even radical changes he has initiated.

However, his first month in office may have also forced him to recognize certain limitations, partly created by the opposition-led parliament. 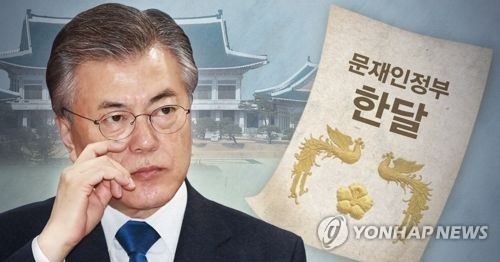 The new president came into office on May 10, one day after the country held a rare presidential by-election caused by the ouster of former President Park Geun-hye.

Because the election was held to fill the top elected office vacated by the former conservative leader, ousted on March 10, the new president was inaugurated immediately following his victory, with no time whatsoever for a power transition.

Unlike most of his predecessors who had their administrations formed and ready to be launched before their inauguration, Moon had to name his prime minister and other Cabinet members after he came into office.

So far, he has nominated only seven new Cabinet members out of 19 total.

Nominations for the 12 other Cabinet members are expected to take more time still, largely for verification amid strong objections from opposition parties against some of the nominees already fielded.

Thus the launch of what will truly be President Moon's new administration will have to wait at least for a few more weeks, if not months.

The ruling Democratic Party currently controls 120 seats in the 300-seat National Assembly, the largest number for any single political party but still far short of a house majority to provide the type of support the president needs, especially in his first year, to implement the changes he promised while campaigning for office.

Still, for many sensational, or even dramatic, changes the president has initiated so far, whether or not the opposition parties approved mattered little amid the strong public support seen in the record figures of Moon's approval rating.

President Moon failed to win a majority of votes in the May 9 presidential election, though he did win the election by a record vote gap in the country's history.

He won a little over 13.42 million votes, accounting for 41.08 percent of the total cast and a 5.57 million vote lead over runner-up Hong Joon-pyo of the now main opposition Liberty Korea Party.

His behavior since the election has often been described as "humble" and "down to earth," apparently winning the hearts of many who may have supported other candidates in the election.

In the first week following his inauguration, 74.8 percent of 1,516 respondents surveyed by local pollster Realmeter said they expected the new president to do well. 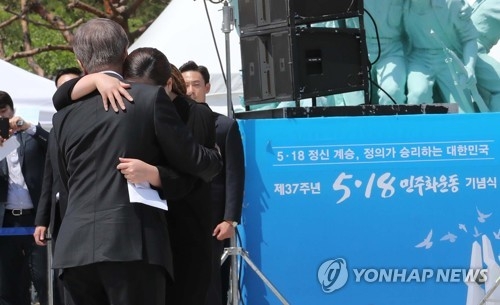 After the president embraced a young woman whose father was killed on the day she was born by military forces cracking down on a democratic movement in Gwangju on May 18, 1980, his approval rating shot up to 87 percent in a survey conducted by a separate pollster, Gallup Korea.

In addition to the famous embrace that may have been emotional but against many security protocols, Moon has also offered to apologize to the victims of toxic humidifier sterilizers that passed government tests between 2008 and 2011, resulting in dozens of people killed and many more injured.

Such an apology, Moon's aides have said, may be long overdue, but not really owed by Moon or his administration.

Following his apparently successful first 30 days in office, the president is now expected to begin directing his attention to foreign relations and North Korean issues.

He is set to hold a summit with his U.S. counterpart Donald Trump in Washington later this month, marking his first-ever summit meeting as South Korea's head of state.

The new president has also vowed efforts to restart the six-nation talks on ending North Korea's nuclear ambition, which have been stalled since late 2008.

The talks involve both South and North Korea, the United States, Japan, China and Russia.

In first 30 days, President Moon sees both problems and possibilities

In first 30 days, President Moon sees both problems and possibilities