South Korea tested their players and tactics against Iraq at Emirates Club Stadium in Ras Al Khaimah, the United Arab Emirates, but failed to collect a victory with no shots on target.

This match was a tune-up for South Korea's upcoming FIFA World Cup qualifier against Qatar in Doha next Tuesday.

With three matches remaining in the final Asian qualifying round for the 2018 FIFA World Cup, South Korea are currently in second place, the last automatic qualification spot, in Group A. With 13 points, the Taeguk Warriors are four points behind leaders Iran and just one point above Uzbekistan.

In Asia, only the top two from each of the two groups advance straight to the World Cup in Russia, while the two third-place teams have to go through playoffs for the right to join the other four. 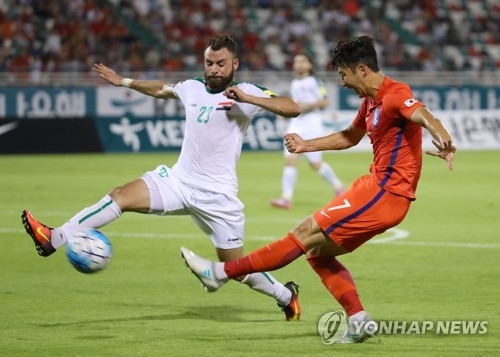 South Korea and Iraq had a dull first half as both sides combined only three shots, none on target.

Stielike's team posted their first shot in the 36th minute when Son fired a left-footed strike that went over the net. Iraq had their promising chance five minutes later, but Ahmad Ibrahim's close range effort was blocked by South Korean defenders.

South Korea replaced three players for the second half, and pushed Ki to the midfield to play with a 4-3-3 formation. Hwang Hee-chan, who came on for Son, took a right footed strike in the 48th, and Lee Myung-joo, who replaced Nam Tae-hee, also fired a shot just outside the box in the 54th, but both attempts missed the target.

Iraq went for a goal with Ahmed Yasin's free kick in the 59th, only to see it denied by South Korean goalkeeper Kim Seung-gyu.

South Korea then made substitutions in the 65th and in the 77th as Lee Jae-sung came on for Ji and Hwang Il-su entered the pitch for Ki. For this match, both teams were allowed six substitutions.

Lee Jae-sung showed his presence in the 84th with his powerful left footed strike in the box, but wasn't able to land on the target. South Korea then made their final substitution in the 88th with veteran defender Kwak Tae-hwi replacing center back Hong Jeong-ho.

After 90 minutes, both teams were given four minutes of extra time, but neither managed to break the scoreless deadlock.

South Korea will depart for Doha on Saturday for their World Cup qualifying match.