South Korea, ranked No. 43 in the latest FIFA rankings, were held to a 0-0 draw by No. 120 Iraq in a friendly match at Emirates Club Stadium in Ras Al Khaimah, the United Arab Emirates, on Wednesday. This match was a tune-up for South Korea's upcoming FIFA World Cup qualifier against Qatar in Doha next Tuesday.

Stielike deployed an experimental 3-4-3 formation against Iraq, with Swansea City anchorman Ki Sung-yueng serving the libero role in the back three. This was the first time that the German used a back three system since he took over the national team in September 2015.

"We could have switched to a back four system since Iraq started with one striker, but we didn't because this was a test," Stielike said after the match. "I ordered the players to stick to the back three because we might have a situation to use the formation in the future."

South Korea had a dull first half as they posted only two shots -- none on target -- and failed to test Iraqi defenders. The Taeguk Warriors in the second half changed to a 4-3-3 formation and had better performance, but failed to score goals.

"In the first half, the players weren't aggressive because of the new formation and also the (hot) weather," he said. "In the second half, they played with a familiar formation, so our game got better."

Although the match was a tune-up for the World Cup qualifier against Qatar, Stielike lamented that his side failed to collect a victory.

"Through this friendly, we wanted to collect a good result, test players and adjust to (the Middle East) environment," he said. "I think the friendly helped the players know how it is like to play football in this kind of condition, but we failed to earn a good result."

Stielike said he will analyze South Korea's performance before facing Qatar. The national team will fly to Doha via Kuwait on Saturday.

With three matches remaining in the final Asian qualifying round for the 2018 FIFA World Cup, South Korea are currently in second place, the last automatic qualification spot, in Group A. With 13 points from four wins, one draw and two losses, they are four points behind leaders Iran and just one point above Uzbekistan.

In Asia, only the top two from each of the two groups advance straight to the World Cup in Russia, while the two third-place teams have to go through playoffs for the right to join the other four.

"We must beat Qatar," he said. "Since we already have lost two matches, we can't allow losses anymore." 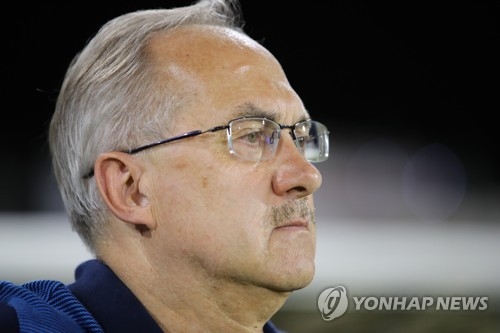