South Korea were eliminated in the round of 16 at the U-20 World Cup at home after losing to Portugal 3-1 on May 30. Shin, who took over the U-20 side in December, still can't get the defeat out of his head.

"After losing to Portugal, the players and I all burst into tears," Shin said in an interview with Yonhap News Agency on Wednesday. "I was so upset that I went to my hotel room and watched the match video all night long."

Shin was a "tactical chameleon" at the U-20 World Cup as he used different tactics in all four of South Korea's matches. Against Portugal, he deployed a 4-4-2 formation, but it turned out to be a miscue as the South Korean defense failed to contain Portuguese players on the flank.

Shin, however, claimed that using the 4-4-2 against Portugal was not a bad choice. He pointed out that Uruguay also came up with a 4-4-2 system against Portugal in the quarterfinals. The South Americans went on reach the last four after edging out Portugal on penalties.

"I still think the 4-4-2 was the best tactic against the Portuguese, who should have felt the pressure of maintaining their stamina," he said. "The psychological issue is the biggest reason why we lost to Portugal." 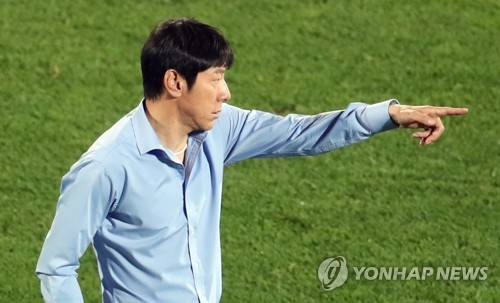 "I think our players showed less than 60 percent of their talent against Portugal," he said. "It's our job to let these young players play as many games as possible with their pro and college clubs."

Shin will take a rest for now, but he is a strong candidate to lead South Korea again at the 2020 Tokyo Olympics, since the U-20 players today will be the main base for the Olympic football team of players under 23. The 46-year-old previously led South Korea to the quarterfinals at the 2016 Rio de Janeiro Olympics.

"Currently, I don't have an official job title, and I'm open to any option available," he said. "But whoever becomes the football team coach for the Tokyo Olympics, I hope he can organize the team together with the players."

Shin has been known for his "fatherlike" leadership when guiding young players. He defended his U-20 players who were criticized by some fans for their cockiness and tendencies to show off.

"In that age group, I think everyone would have acted like that," he said. "If we look back at how we behaved when we were young, we can understand the players."

At the U-20 World Cup, Shin's side was led by two FC Barcelona prospects -- Lee Seung-woo and Paik Seung-ho -- who scored two goals apiece. Shin said what's important is their future. 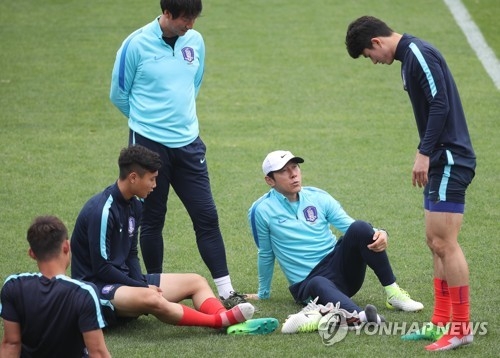 Shin said until he decides his next step, he will spend more time with his family, especially with his son.

Shin's eldest son, Shin Jae-won, is a footballer who represented South Korea at the 2015 U-17 World Cup in Chile. He played together with many of the current U-20 members but failed to get a nod from his father for this U-20 World Cup.

Shin Tae-yong said he purposely decided not to include his son on the national team because such a selection could have caused misunderstanding from others and damaged the team atmosphere.

"Right after I took over the U-20 team, I crossed out my son's name from the national team list," he said. "Jae-won made a big sacrifice for his father. I'm sorry for him."