SEOUL, June 8 (Yonhap) -- One month into office, South Korean President Moon Jae-in has wasted no time in tackling diplomatic and security challenges from the controversial U.S. missile defense deployment to a row with Japan over a sex slavery settlement.

His hope to reset ties with North Korea faces a major test as Pyongyang has continued to be provocative with more frequent missile firings than before his inauguration.

"The Moon Jae-in administration was launched under the worst-ever external circumstances in the history (of South Korea)," said Yun Duk-min, former chancellor of the Korea National Diplomatic Academy.

He cited the North's growing threats, a new alliance approach by the Donald Trump administration advocating "America-first" policy, and a hegemonic rivalry between China and Japan in Northeast Asia. 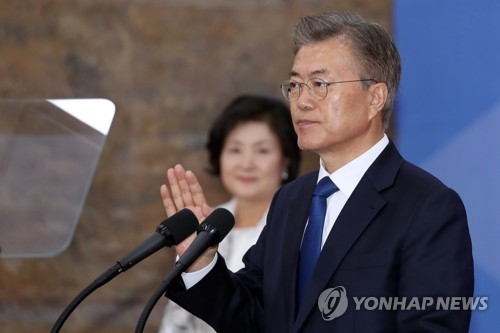 As soon as he was inaugurated, Moon promptly began to fill the country's summit diplomacy vacuum created by the political trouble of his ousted predecessor Park Geun-hye.

Moon then sent high-profile special envoys to Washington, Beijing, Tokyo and Moscow as one of his first diplomatic steps.

"He deserves credit for endeavoring to recover such (presidential) diplomatic routes through the swift dispatch of the special envoys," Yun said. 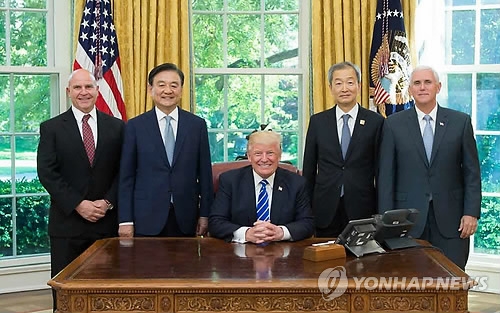 Moon is scheduled to meet bilaterally with Trump in Washington at the end of this month, a notably early first summit between the allies under a new South Korean president.

It has apparently helped assuage public concern here about the "Korea passing," referring to the nation being sidelined in discussions by the U.S. and major powers over key Korean Peninsula issues.

Moon, in particular, did not hesitate to raise some major diplomatic issues, including the 2015 agreement with Japan on "finally and irreversibly" resolving the row over the sexual enslavement of Korean women by Japanese troops during World War II.

In phone talks with Abe on May 11, Moon stressed that a majority of the South Korean people do not accept the deal "emotionally." The remarks herald a push for renegotiating or scrapping the accord.

He has also taken direct aim at the THAAD missile defense system being installed here by the U.S. Forces Korea, rekindling a massive political controversy at home and worries about a possible impact to the Seoul-Washington alliance. 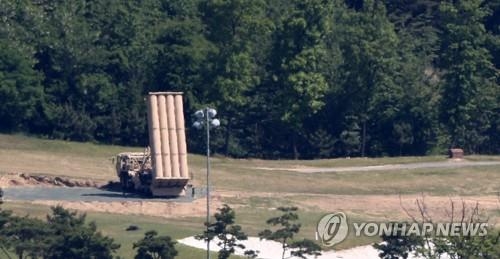 Moon's negative view on the THAAD deployment, which he regards as hasty and shrouded in secrecy, is not new.

But he caught not only military authorities but also the public off guard with the May 30 call for a probe into the "domestic process" of THAAD equipment being brought into the nation and positioned at a former golf course in the southeastern rural town of Seongju.

As the commander-in-chief, he said he was kept in the dark about progress in the deployment process, especially about four additional THAAD interceptor launchers in waiting to be installed on top of the two already in place.

All local media attention has since been paid to THAAD. Whether intended or not, THAAD has dominated Moon's diplomatic and defense agenda in recent days.

Following a weeklong investigation, Moon's office announced that defense ministry officials had intentionally concealed the information in a bid to avoid a strict environmental impact assessment and quicken the THAAD deployment.

Cheong Wa Dae announced the suspension of the THAAD deployment until the end of a due joint environmental survey, which is expected to take at least a year, versus the allies' plan to put the system into full operation within this year.

THAAD will certainly be among the top agenda items in the upcoming summit between Moon and Trump.

Moon's efforts to improve inter-Korean relations also got off to a rough start.

Presiding swiftly over a National Security Council meeting, he warned Pyongyang that his government will deal resolutely with further provocations, even if it does leave the door open for dialogue.

The Moon administration later declared a "flexible" approach on a humanitarian program for the North and approved plans by some local nongovernmental organizations to contact North Koreans. The North turned down the offer, demanding it first be recognized as a nuclear state.

Another urgent task for Moon is to complete the lineup of his diplomatic and security team.

Moon appointed relatively dovish officials as presidential aides, including the national security adviser Chung Eui-yong, a former diplomat and politician, breaking away from the yearslong practice of installing a retired military general in the post.

It was seen as reflecting the president's will to resolve the North Korea issue via dialogue and manage Seoul's ties with neighboring countries.

Earlier this week, however, Moon withdrew his pick of Kim Ki-jung as vice chief of the National Security Office amid rumors of his bad conduct as a professor at Yonsei University and poor health.

It remains uncertain whether Kang Kyung-hwa, nominated to lead the foreign ministry amid reports of some alleged ethical lapses, will survive the National Assembly's confirmation hearing.

Moon has yet to choose nominees for the unification and defense ministers as well.