SEOUL, June 8 (Yonhap) -- K-pop girl group DIA held a fan meet-and-greet as it was wrapping up promotional activities for its 2nd album "YOLO."

DIA had a good time with fans at the Culture Center of Daechi-dong Office, southern Seoul, by dancing, singing and taking pictures with fans.

The second album is filled with songs written by the members. Its title song, "Will you go out with me," was popular among fans for a long time. 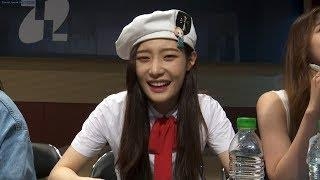 Blooper reel from Yonhap interview with Jeong Cha-yeon of DIA

Blooper reel from Yonhap interview with Jeong Cha-yeon of DIA