SEOUL, June 8 (Yonhap) -- Air Busan, a South Korean budget carrier, on Thursday launched a new route connecting the country's southern city of Daegu to Tokyo, apparently in a bid to cope with the falling number of passengers from China.

The daily passenger service will depart from Daegu at 8:40 a.m. every morning and arrive at Narita International Airport at 10:40 a.m.

Air Busan also expanded the number of flights connecting Daegu and Sapporo to five times a week from the previous three. The route connecting to Osaka also doubled to two flights a day.

There has been economic tension between South Korea and China over Seoul's decision to deploy an advanced U.S. missile defense system in the country. The row has adversely impacted passenger traffic between the two neighboring countries, dealing a harsh blow to the retail and tourism industries.

Industry watchers said the budget carrier's efforts to expand flights to Japan can be seen as a move to offset the China falloff. 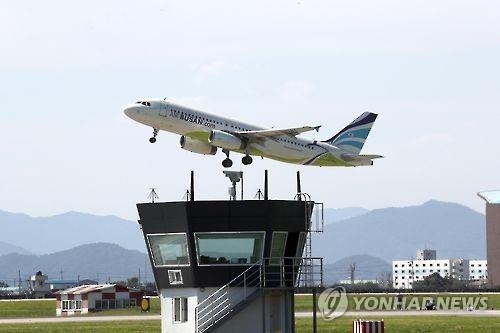