Kia, the country's second-biggest carmaker by sales after Hyundai Motor Co., has added the Stinger to its lineup to enhance its brand image and compete with high-performance models, such as the Audi A4 and BMW3 series, in global markets.

"Given the strong response, we expect the Stinger to boost sales amid growing interest among consumers in high performance cars," the company's Vice President Kim Chang-sik said in a press conference held before a media test-drive event.

The Stinger, the first dedicated sports sedan that has been set up on a rear-wheel drive platform, went on sale May 23 in Kia's home market. It comes with three engine choices -- a 2.0 turbo, a 3.3 twin-turbo and a 2.2 diesel engine -- all mated to an eight-speed automatic gearbox. The 3.3 turbo with 370 horsepower on tap and 52.0 kilogram-force meters of torque can push the car from naught to 100 kph in 4.9 seconds.

The performance-oriented car is available at the starting price of 35 million won (US$31,000) with numbers rising to 53.4 million won depending on features, such as the all-wheel-drive function. 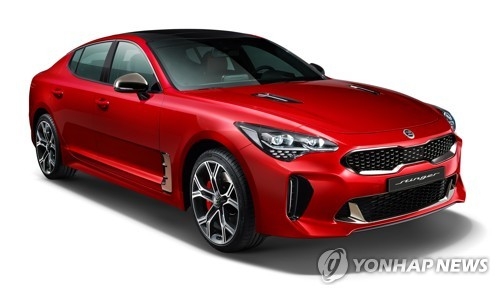 The Stinger will carry a distinct "E badge" that will replace the KIA logo domestically. But it will be sold overseas with the traditional company markings, which is expected to help sales.

The maker of the K5 sedan and the Sportage SUV plans to export the Stinger to the United States and Europe within this year, Vice President Kim told Yonhap News Agency last month.

The new car carries seven air bags in all models and a launch control function, an electric aid to help drivers accelerate rapidly from a standing start.

Kia, which is one of the flagships of Hyundai Motor Group, one of the leading automotive conglomerates in the world, introduced its Audi A4 challenger at motor shows held in Geneva, Detroit and Seoul in the first quarter.

In recent months, Hyundai and Kia have suffered sales declines in major markets, such as the U.S. and China, due to a lack of new models and a diplomatic row over the deployment of an advanced U.S. anti-missile system in South Korea, respectively.

China has explicitly opposed the deployment of the Terminal High Altitude Area Defense (THAAD) system as it could be used against it. Seoul and Washington have argued the THAAD system is only aimed at countering missile threats from North Korea.