Kim Yi-su, who was tapped by President Moon Jae-in last month, made the remark during the last session of his two-day confirmation hearing at the National Assembly.

Opposition lawmakers have taken issue with his rejection of a petition to disband the far-left Unified Progressive Party in 2014. The party, which was accused of being pro-North, was still disbanded by a majority opinion of the court's nine-member bench.

In explaining his reason for rejecting the petition, Kim, who has served on the bench since 2012, claimed the UPP's Rep. Lee Seok-ki and his associates did not have enough power to control the party. Lee is currently in jail for plotting to overthrow the South Korean government in the event of an inter-Korean war.

Kim's appointment requires consent from a majority of lawmakers present during a floor vote that can be set up by a majority of all 299 legislators. The ruling Democratic Party, which holds only 120 parliamentary seats, has defended the nominee, saying he has no "definitive defect."

During Wednesday's hearing, Kim apologized over allegations that he was at the forefront of judicial punishments for those who participated in the 1980 pro-democracy movement in Gwangju, 350 kilometers south of Seoul. He also pledged to pursue national cohesion.

But his opponents said that it is inappropriate to have him helm the court given that Moon has vowed to enshrine the spirits of the popular movement in the Constitution by amending the basic law.

On Friday, rival parties are expected to determine whether to adopt a joint report on the outcome of the hearing. Should the report be issued, the confirmation motion could be put to a vote at a plenary session slated for next Monday. 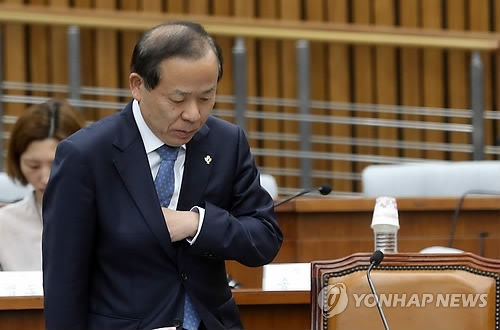