SEOUL, June 8 (Yonhap) -- South Korea's major opposition parties urged the government to allow immediate and complete deployment of the THAAD missile defense system Thursday, one day after the presidential office Cheong Wa Dae said the deployment will have to be suspended at least for months.

The opposition calls came after North Korea fired a series of what appeared to be surface-to-ship cruise missiles from its east coast earlier in the day.

Seoul's defense ministry said the missiles had a short range of around 200 kilometers, but they marked the fourth rocket launch by the communist state since South Korea's new Moon Jae-in administration came into office last month.

"The government is charging at the THAAD deployment and the Korea-U.S. alliance while taking no measures whatsoever against North Korea's missile launches," said Rep. Chung Woo-taik, floor leader and acting chief of the main opposition Liberty Korea Party.

On Wednesday, a senior Cheong Wa Dae official said the ongoing THAAD deployment should be suspended until the end of an environmental impact assessment. 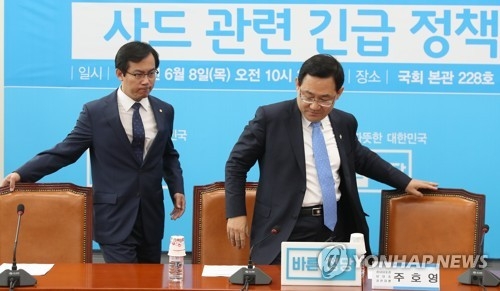 The official did not say how long the assessment will take but noted a U.S. study before the THAAD deployment in Guam had taken 23 months.

The U.S. Forces Korea earlier said two THAAD launchers, along with radars and other crucial components, have been deployed in South Korea, making its missile defense capabilities partially operational.

At least four more THAAD launchers are waiting to be deployed, earlier reports have confirmed.

"Failing to install a defense system against North Korean missiles will mean neglecting the country's duty. Delaying the deployment (of THAAD), citing an environmental assessment, while North Korea continues to launch missiles every week cannot be accepted by the people," Rep. Lee Cheol-woo of the main opposition party said. Lee currently heads the parliamentary intelligence committee.

The splinter conservative Bareun Party too noted a need to install the U.S. missile shield at an early date.

"The North has already developed nuclear capabilities that target South Korea and is also developing hydrogen bombs. A need to build a defense system at the earliest date possible only requires common sense as the North has been developing nuclear weapons and missiles for a very long time," Rep. Kim Se-yeon, secretary-general of the Bareun Party, said in a meeting with party members.

The center-left People's Party stopped short of demanding an immediate deployment of THAAD but noted that Cheong Wa Dae should have handled the THAAD issue differently.

"We wish (the government) would also conduct its digging around the THAAD issue quietly, which by the way does not serve our national interest in any way," Rep. Lee Yong-ho, the party's policy chief, told a general meeting of party lawmakers.
(END)