SEOUL, June 8 (Yonhap) -- With only two games under his belt in the Korea Baseball Organization (KBO), Samsung Lions rookie outfielder Kim Seong-yoon can already lay claim to a record, unflattering as it seems.

At 163 centimeters, Kim, 18, is the shortest player in the league's 35-year history. Kia Tigers' shortstop Kim Sun-bin had been the shortest for nine years at 165 cm.

But Kim Seong-yoon, the fourth-round draft pick out of high school, said his small stature doesn't affect his play on the field.

"I don't know what other people may think, but I've never thought (my height) affects my play," Kim told reporters at Jamsil Stadium in Seoul on Wednesday, before the Lions faced the host Doosan Bears. 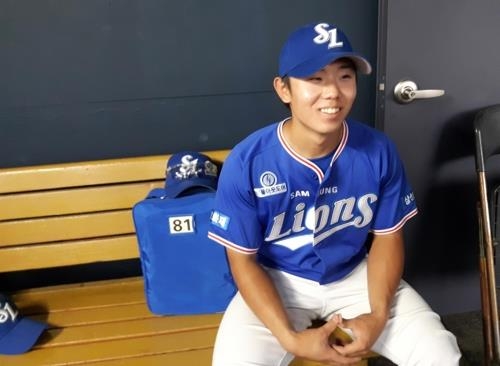 After getting called up from the minors last Sunday, Kim has already made an impact on defense.

With the Lions nursing a 12-10 lead in the bottom of the 10th against the Bears on Tuesday, Kim entered the game in left field as a defensive replacement. Min Byung-hun led off with a sinking line drive to shallow left, and Kim made a fine diving grab to rob Min of a potential extra-base hit.

"I was hoping a ball would be hit to me," Kim said. "And as soon as the ball left the bat, I knew I had to dive to make the catch."

Samsung manager Kim Han-soo said the diminutive teenager is a capable defender and a smart base runner. He can also bunt for hits, but he could use some more power at the plate.

The player admitted he does lack power, and he's been hitting the weights to address that.

For the most part, though, he wants to focus on what he does well.

"Instead of trying to make up for what I am lacking, I am trying to highlight my strengths," he said. "My speed and defense are the keys."