"It is very regrettable that North Korea again fired a missile today," the spokesman quoted Chung as saying during meetings with Tadamori Oshima, speaker of Japan's House of Representatives, and Chuichi Date, speaker of the country's House of Councillors.

"South Korea and Japan must cooperate very closely to resolve the North Korean nuclear issue and for peace in Northeast Asia," he said. 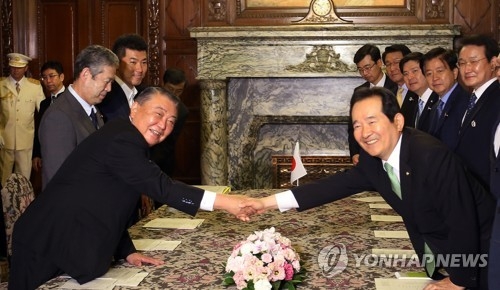 North Korea appeared to have fired a round of short-range surface-to-ship cruise missiles from its east coast early Thursday, according to the South's Joint Chiefs of Staff. It was Pyongyang's fifth known missile test since the South's liberal Moon Jae-in administration took office May 10.

Oshima expressed agreement with Chung's remarks, saying bilateral cooperation is especially important to resolve the North Korean conundrum. He also stressed the importance of summit talks between Moon and Japanese Prime Minister Shinzo Abe, which have yet to take place.

Date denounced the North's continued provocations and called for firm countermeasures among South Korea, Japan and the U.S., as well as on the international stage.