SEOUL, June 8 (Yonhap) -- A former health minister was sentenced to 2 1/2 years in jail Thursday on charges of abuse of power in connection with a massive corruption scandal that removed former President Park Geun-hye from office.

The Seoul Central District Court handed down the sentence to Moon Hyung-pyo, who served as health minister from 2013-2015, on charges of pressuring the National Pension Service (NPS) to approve a controversial merger between two units of Samsung Group in 2015.

The merger was designed to ensure a smooth transfer of management to Samsung heir Lee Jae-yong, who is standing trial on charges of bribing Park's close friend Choi Soon-sil, and in effect the then president, according to prosecutors.

"(Moon) faces high chances of censure as he exercised pressure (on the NPS) through public servants of the health ministry and severely damaged the independence of the NPS," Judge Cho Eui-yeon said in the ruling.

The former minister was also convicted of lying under oath when he denied the charge against him during a parliamentary hearing in November.

Separately, the court sentenced Hong Wan-sun, then head of the NPS' asset management division, to 2 1/2 years in prison on charges of dereliction of duty. He is accused of inflicting losses on the pension fund by ordering the merger's approval. 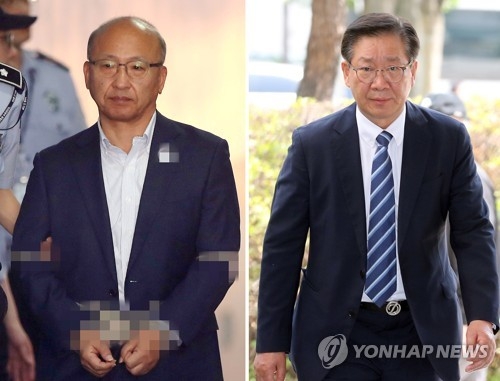