The premier made the remark during a meeting with South Korea's National Assembly Speaker Chung Sye-kyun at his official residence in Tokyo.

"Together with the new Moon Jae-in government, I would like to build a future-oriented new relationship between South Korea and Japan," he said, noting that the two leaders have spoken twice by phone since Moon took office on May 10.

"I hope Japan and South Korea, and also South Korea, the U.S. and Japan, will be able to closely cooperate to (resolve) the urgent security issue involving North Korea," Abe added.

Chung, who is on a three-day official visit to Japan, concurred with the prime minister's remarks. 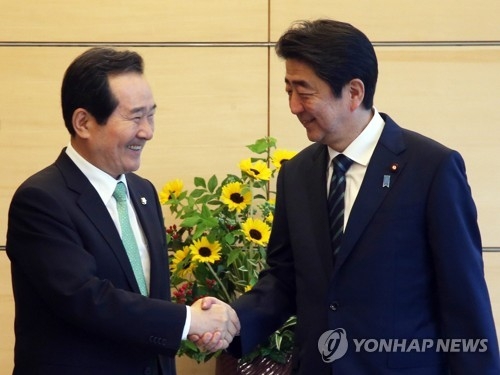 Speaking to reporters after the meeting, Chung said the two sides also agreed to quickly restore summit meetings and "shuttle diplomacy" that have been suspended amid historical disputes.

"We agreed to communicate and work together for (North Korea's) denuclearization," he said.

He added, however, that they did not discuss the issue of South Korean "comfort women" who were forced into sexual slavery for Japanese troops during World War II.

The issue has long been a thorn in bilateral ties, prompting many South Koreans to demand the renegotiation of a 2015 deal aimed at addressing the victims' grievances.