The remarks came hours after the North fired what appeared to be surface-to-ship cruise missiles from its east coast.

The short-range missiles apparently posed no immediate threat to South Korean and U.S. forces here, but they marked the North's fifth missile or rocket launch since the Moon Jae-in administration came into office on May 10.

"The only things North Korea can gain from these provocations are economic isolation and economic difficulties," the president was quoted as saying in the first National Security Council meeting he chaired since his inauguration.

"They will lose their opportunities for development," he added, according to Park Soo-hyun, a spokesman for the presidential office Cheong Wa Dae. 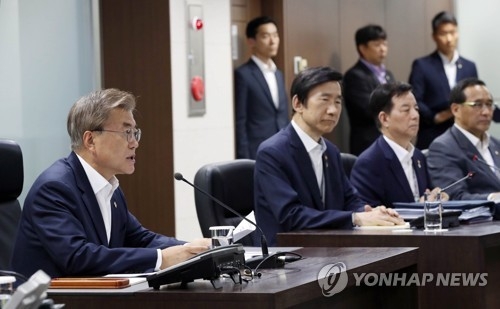 But should the North decide to give up its nuclear ambitions, it will win the support of South Korea and the rest of the international community for its development, the president added.

Moon has repeatedly emphasized the need to use dialogue, as well as sanctions or any other means necessary, to rid North Korea of its nuclear ambitions, also offering to resume the country's economic cooperation for the impoverished North in exchange.

"I declare that our government will never back down or make concessions when it comes to our national security and the safety of our people," he was quoted as saying.

The president also ordered the military to "maintain a readiness to counter any armed provocation from the North," according to the Cheong Wa Dae spokesman.

"I ask the military to work and secure key self-defense capabilities to counter North Korea's nuclear and missile threats while maintaining a strong defense posture of the joint Korea-U.S. forces," he said.

He also stressed a need to find what he calls a fundamental solution to the North's repeated provocations.

"I wish the foreign and defense ministries will work with our allies, including the United States, to have the international community and the U.N. Security Council sternly deal with the North's provocations," he said.

"Also, I ask you all to share your wisdom in finding ways to induce changes in North Korea's stance and ultimately lead to a complete denuclearization of the North," the president added.

Thursday's meeting was attended by Prime Minister Lee Nak-yon and the president's chief security advisor Chung Eui-yong, as well as the foreign, defense and unification ministers.