BUSAN, June 8 (Yonhap) -- A short, stocky man with close-cropped hair and a protruding pot belly stares into the air. Behind the mask of his gruffness and brash attitude, he seems to hide sensitivity or even timidity.

In fact, he is holding a bouquet of red roses or a puppy with its tongue sticking out. Wearing a thick gold necklace, he unbecomingly carries a purse under his arm, that looks too cute for his otherwise macho posture.

Sculptor Kim Won-geun said he took the motif from good-for-nothing slobs whom he grew up with in his small hometown of Boeun in North Chungcheong Province.

He neither confirmed nor denied that he wasn't one of them.

"These are very complicated characters. He can be a bully and a very bad man. But at the same time, he has a sense of justice," the sculptor told Yonhap News Agency during a recent interview at the Busan Exhibition & Convention Center (BEXCO). He was attending the 6th Art Busan, an annual art fair that took place on June 2-5 at the venue of the port city. 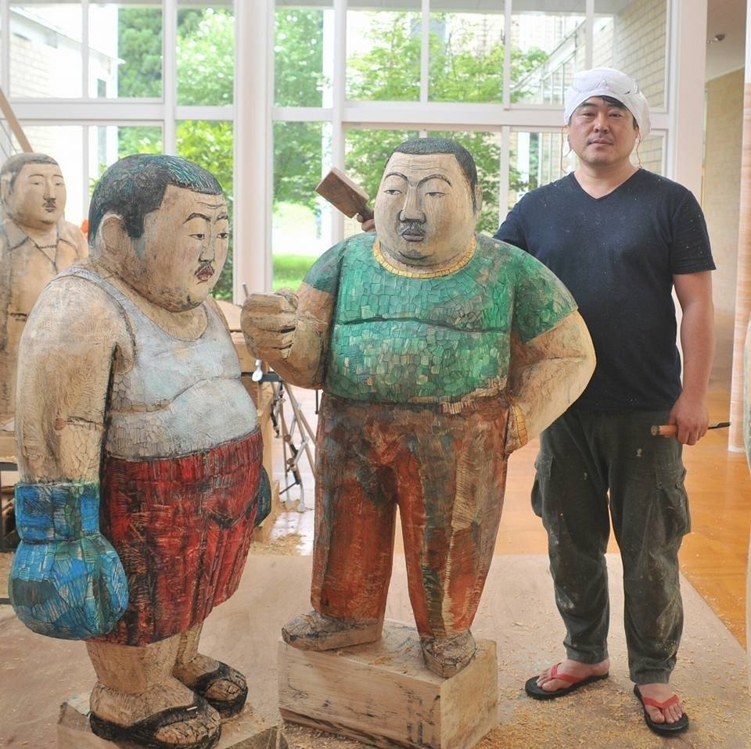 "He is the kind of person who might work as a loan shark and raid a debtor's home for intimidation, only to buy noodles for the hungry kids he finds there."

In the sleepy town where he was born and raised, there were a lot of such characters to model after for his artwork, the 46-year-old sculptor said. "They were social outcasts who were far from being diligent, and thus never had a stable job. But deep down, they were romantic, funny and warm-hearted."

As a teenager, he once admired those macho troublemakers in the neighborhood. He envied the dragon-patterned shirt one of the top fighters wore, and often got himself into trouble. He was even once addicted to alcohol, he admitted.

"I had my share of acting all rebellious and wild. I can't say I have always lived an honest and good life. But aren't we all like that, to some degree?" After graduating in 1999 from Wonkwang University in Iksan, South Jeolla Province, majoring in sculpture, he had to eke out a living by working in a furniture company and later running a fried chicken restaurant. For the next 10 years, he continued to be surrounded by those people who could be easily dismissed as lowlifes, he said.

"Some of my colleagues were ex-convicts. They neither settled down nor led a stable life. I reflected their stories in my work as well."

In 2009, when he could finally come back to the sculpture that he had so desperately longed for, he wanted to share the sensitivity and warmth hidden behind the masculine and rough appearances of the men whom he grew personally attached to and felt deep affection for.

"My men are short, fat and ugly, and suffer from a sense of inferiority. They've got no money, no good job. Through their stories that spur humor and pathos, I hope the viewers feel relieved and be consoled, thinking, 'At least, my life looks better than his.'" 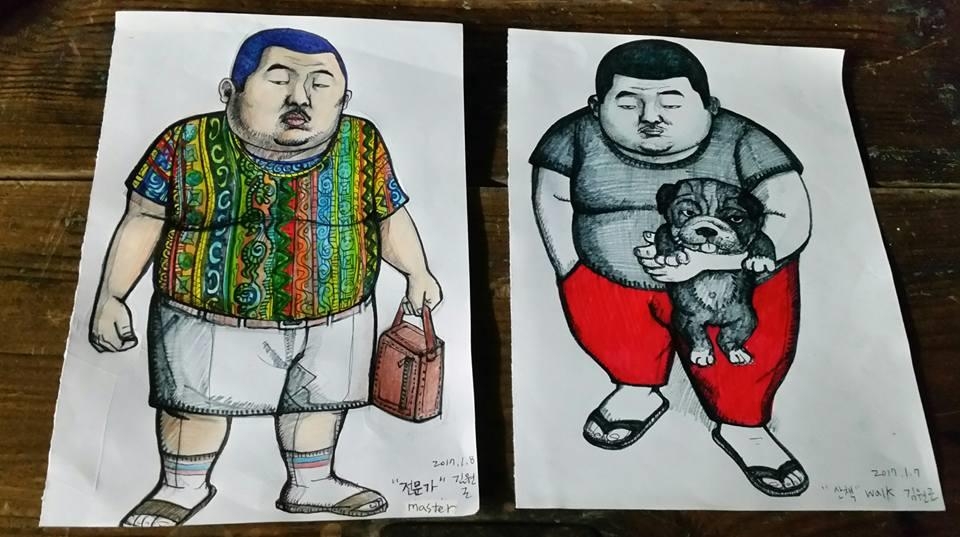