The three women in their 90s held a press conference in central Seoul to voice their backing of Kang Kyung-wha, a former U.N. human rights expert tapped to become the nation's first female foreign minister. Opposition parties billed her unfit citing her inexperience and personal ethics.

"We want Kang to be the foreign minister. She promised to resolve our problems," Lee Yong-soo, 90, told reporters. "Kang Kyung-wha visited suffering comfort women. When she came and consoled us, all the aged women lying on bed cried, and so did heaven." 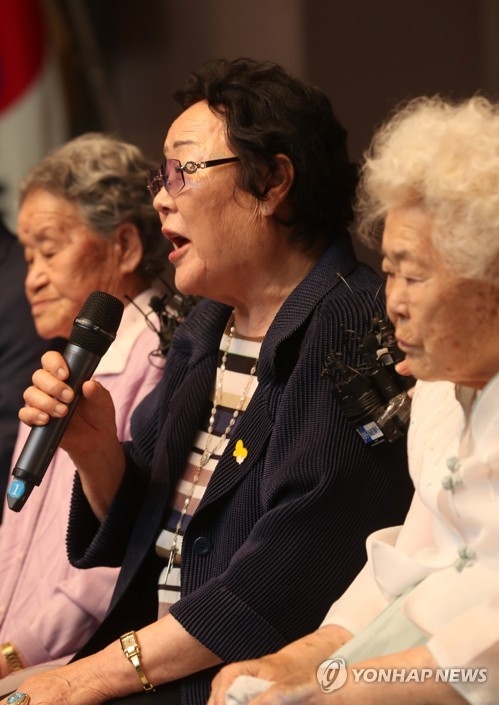 They were among about 40 surviving victims of Japan's wartime sexual slavery, euphemistically called comfort women. Kang visited their shelter, the "House of Sharing," last week.

Opposition parties are ramping up their objection to her appointment over allegations about, among others, her daughter's false address registration and belated gift tax payments, and her real estate speculation.

She was grilled by lawmakers during a parliamentary confirmation hearing on Wednesday and apologized for some of the allegations.

Though parliamentary consent is not required for her appointment, its disapproval could be a burden on President Moon Jae-in as he faces an opposition-led parliament.

During the hearing, Kang criticized a 2015 deal between South Korea and Japan over the comfort women issue, saying doubts linger over whether the agreement was surely based on "a victims-oriented approach."

Under the deal, the two neighbors agreed to "finally and irreversibly" resolve the comfort women issue. Tokyo expressed an apology for its colonial-era atrocities and agreed to contribute 1 billion yen (US$9.97 million) to a foundation dedicated to supporting the victims.

Critics, however, call into question the sincerity of the apology, as Japan refused to recognize its legal responsibility for the forced mobilization of the women. They also criticized the deal for being hastily arranged without sufficiently seeking the opinions of the victims.

Lee called the 2015 deal selling off the victims in return for the money and demanded a heartfelt apology from Japan for its wartime atrocities. The former comfort woman added that she wishes that Kang would become the foreign minister to address the comfort women issue.