SEOUL, June 8 (Yonhap) -- North Korea on Thursday dispatched a delegation to a United Nations meeting on the rights of the disabled to be held in New York next week, the country's state-run news agency said.

"A DPRK delegation led by Ri Hung-sik, ambassador of the Foreign Ministry, left here (Pyongyang) to take part in the 10th session of the conference of state parties to the Convention on the Rights of Persons with Disabilities to be held in New York of the United States," the Korean Central News Agency said in a brief release.

North Korea signed into the Convention on the Rights of Persons with Disabilities in July 2013 and its assembly ratified it last year. 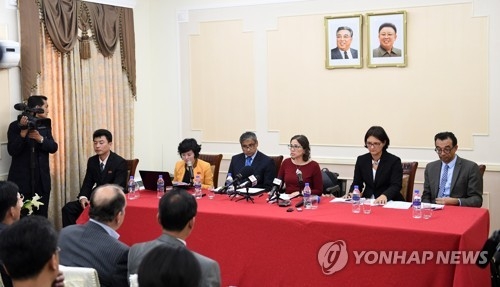 Last month, North Korea allowed U.N. Special Rapporteur Catalina Devandas-Aguilar on the rights of people with disabilities into the country as the first U.N. official to look into the country's human rights situation.

The move is likely aimed at defending its human rights conditions against the international community's growing abuse accusations.

Amb. Ri has been North Korea's point man to fight the U.N.'s resolutions on the North Korea human rights situation since around 2015.