SEOUL/WONJU, South Korea, June 8 (Yonhap) -- It's safe to say Kia Motors Corp. has added a premium touch to its ever expanding lineup with its first ever sports sedan, the Stinger, which went on sale last month in South Korea.

On Thursday, automotive journalists had an opportunity to experience the Audi A4 challenger, the 3.3 twin-turbo, rear-wheel-drive Stinger with an eight-speed automatic gearbox along a 168-kilometer course that included urban and expressway driving conditions.

At first glance, a low, wide radiator grille, a large air intake under a long hood, 19-inch Michelin ultra-high-performance tires and fastback roofline were enough to give the impression of a purebred performance car.

After 30 minutes of city driving, the fully optioned Stinger, weighing in at 1.7 tons, hit the motorway and effortlessly reached speeds of 190 kilometers per hour in 10 seconds when driven in the "sport" mode setting.

Even at speed, the car felt stable with the steering wheel being well weighted as it was controlled by the electro-electronic system. High-performance-oriented tires specialized for sports cars and a slightly stiff suspension definitely made the car feel planted.

The Stinger comes with three engine choices -- 2.0 turbo, 3.3 twin-turbo and 2.2 diesel -- that provides a wide range of options for drivers. In particular, the 3.3 turbo with 370 horsepower on tap, and 52.0 kilogram-force meters of torque can push the car from naught to 100 kilometers per hour in a quick 4.9 seconds.

Given the powertrain, most buyers will not look at the fuel economy figures when considering the car, and it manages an average of 6-7 km per liter of gas in the "sport mode" at speeds of 120 kph.

The Stinger, on the other hand, with its cruise control set at a leisurely 80 kilometers per hour did manage 10-11 km on a liter of fuel during urban driving conditions.

The fuel economy differed depending on the Stinger's five driving modes -- Smart, Eco, Comfort, Sport and Custom. Without question, driving in sport mode spent the most fuel but offered the "ultimate" driving experience. 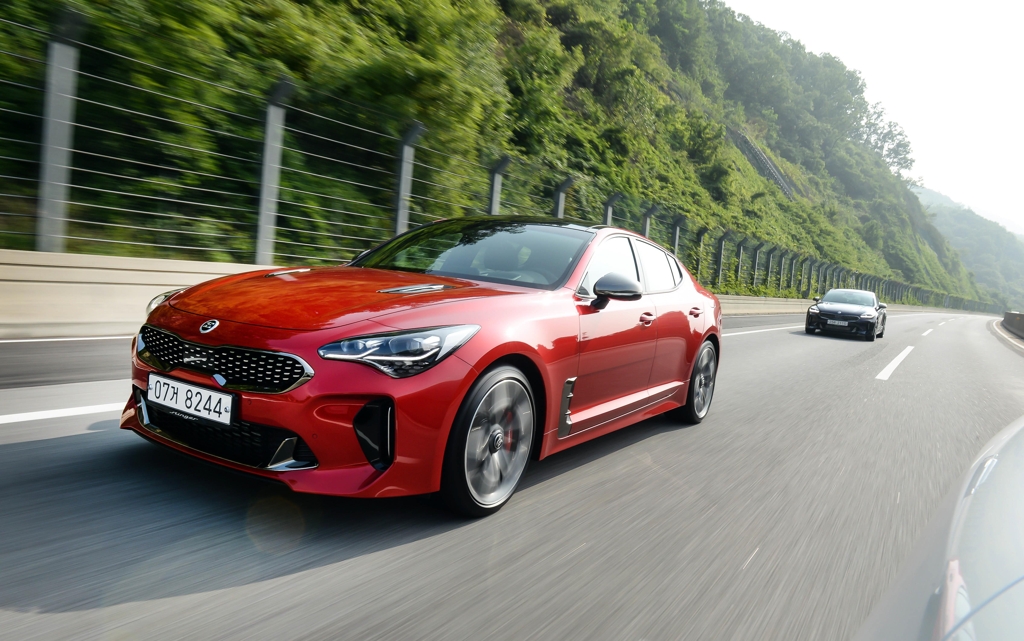 The price tag of a upper trim 51.1 million won (US$45,000) rear-wheel-only 3.3 twin-turbo was also not too steep in light of the car's sports credentials, although the "base" Stinger model can be had for 35 million won in the domestic market. An all-wheel-drive version of the twin turbo six cylinder car could reach as high as 53.4 million won.

In regards to safety features, the Stinger carries seven air bags in all models and a launch control function, an electric aid to help drivers accelerate rapidly from a standing start.

The HDA and SCC functions performed as advertised by Kia on expressways, were able to remain in the lane and followed the vehicle ahead.

On the crucial matter of acceleration and braking, the Stinger responded immediately to input. And the driver's seat held the driver's back and waist firmly in place even during tight turns.

On the downside, the Stinger suffered from limited head space in the back seats due to its roofline, while its rear view was not the best. Moreover, the prices may be expensive for those who may be considering an Audi A4 and BMW 3 sports sedans.