WASHINGTON, June 8 (Yonhap) -- The United States should consider concluding a peace treaty with North Korea without preconditions in order to encourage the communist nation to give up its nuclear programs, a former U.S. diplomat and an expert suggested Thursday.

James Dobbins, a former assistant secretary of state, and Jeffrey Hornung, a political scientist at the RAND Corp., made the case in a joint op-ed piece in the New York Times, saying it's important to assure the North's leader that he won't end up like Saddam Hussein of Iraq or Muammar el-Qaddafi of Libya.

"Successive American presidents have insisted on a number of preconditions before any serious peace negotiations could start, including a commitment to denuclearization and the halting of further missile tests," the experts said.

"But North Korea's supreme leader, Kim Jong-un, is unlikely to agree to give up his country's nuclear and missile programs without receiving convincing assurances that he will not suffer the fate of Saddam Hussein of Iraq or Muammar el-Qaddafi of Libya," they added.

A peace treaty formally ending the Korean War, including American recognition of the government in Pyongyang and an opening of diplomatic relations, is an essential component of such assurance, they said.

They also cited as an example the United States' 1974 establishment of an embassy in East Germany while continuing to regard West Germany as the sole legitimate successor government of the historical German state and of a future reunified Germany.

"One can imagine using similarly creative ideas in a peace treaty to bridge some of the differences between the two Koreas," they said.

U.S. officials should be considering what would make an agreement work, such as what governments would participate and how an agreement would be verified and enforced, they said.

"The complete dismantling of North Korea's nuclear weapons and missile programs should remain Washington's ultimate objective. Standing ready to formally end the old war may be the key to getting there without starting a new one," the said. 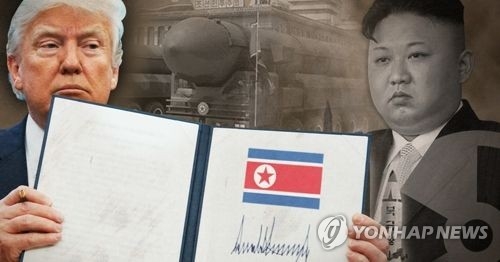