Park Geun-ryoung, a younger sibling of the ousted former president, is accused of receiving 100 million won (US$89,000) in checks from the head of a social welfare organization in 2014 after promising to secure a supply contract for its products with a public corporation.

According to prosecutors, Park had no connections to the relevant person at the public corporation and was not in a position to help win the contract.

She has also been indicted on charges of violating the Attorneys-at-Law Act for allegedly taking the money in exchange for requesting favors from a public corporation employee.

A special inspector under the then president filed charges against her in July.

Park has denied the charges, claiming she returned the money. The person who offered the money has backed up the claim, saying he does not want her to be punished because he received the amount in full.

By law, a fraud suspect can still be punished after repaying the money. 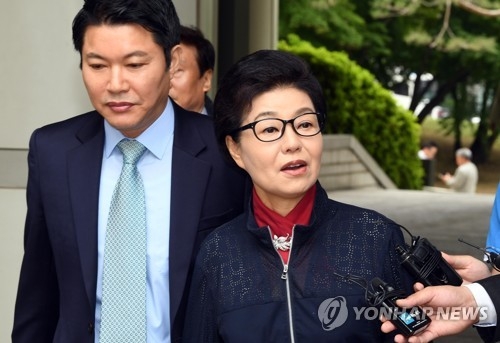