SEOUL, June 9 (Yonhap) -- South Korea's Navy received a new minelayer from a local shipbuilder Friday, as it's trying to beef up its mine warfare capabilities against North Korea.

Built by Hyundai Heavy Industries, the 3,000-ton vessel, named Nampo, was delivered to the Navy in a ceremony held in the firm's shipyard in the southeastern city of Ulsan, according to the Defense Acquisition Program Administration (DAPA).

It will be commissioned in early 2018 after seven months of test operations, DAPA added.

It can accommodate 120 crew members and sail at a top speed of 23 knots, equipped with a deck for a chopper, advanced weapons, radars, and the Sound Navigation and Ranging (Sonar) system. 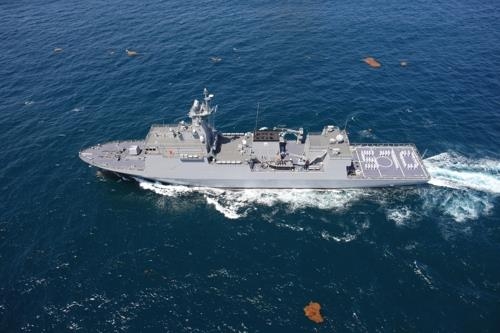 "In wartime, it will lay mines in major ports and waters, serving as the flagship of the mine warfare fleet," DAPA said.

Currently, the Navy has a 2,600-ton minelayer, the Wonsan, which was put into actual operation in 1998.

The Navy has named its minelayers after North Korean regions where mine warfare was staged during the 1950-53 Korean War.