SEOUL, June 9 (Yonhap) -- What a difference a year can make -- and not in such a positive way for SK Wyverns first baseman Choi Seung-jun.

Choi came out of nowhere to win the Player of the Month in the Korea Baseball Organization (KBO) in June 2016, after belting 11 home runs in 26 games. That included a three-homer game on June 28 against the KT Wiz, and Choi also led the league with a .783 slugging percentage that month.

Choi made his KBO debut in 2006 but had just two career home runs in 36 games prior to the explosion last year.

Turn the clock forward to June 2017. Choi, 29, is toiling in the Wyvern's minor leagues, where he's trying to return from a back injury.

"Things have been so different this year compared to just a year ago," Choi told Yonhap News Agency on Friday via phone. "But I can't blame anyone. I am the one that got hurt, and other players are doing well (with the big club)." 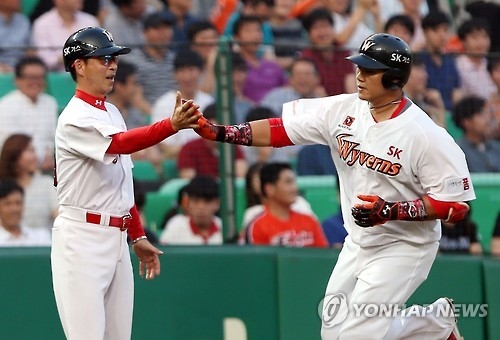 It all started last July. Choi injured his right knee ligament when he stepped on the first base bag awkwardly, and missed the rest of July and all of August. He returned to action on Sept. 11 but did not go deep in 12 games after rejoining the lineup.

For the season, though, Choi still had strong numbers, with 19 home runs and 42 RBIs in 76 games.

The injury bug bit him again in spring training this past February, when Choi hurt his hamstring in the final intrasquad game.

"Manager (Trey) Hillman asked me to sit down with him, and he told me, 'We've got to have an extra outfielder. Don't get too upset. Go down to the minors and play hard,'" Choi recalled. "And just because I am in the minors, I won't wish any bad luck on the guys in the big league. I believe an opportunity will come if I continue to work hard."

The Wyverns, though, are in no hurry to make changes to their lineup, thanks to an impressive power surge without Choi.

Sluggers Choi Jeong and Han Dong-min are tied for the KBO lead with 18 home runs apiece. Kim Dong-yub is fifth with 13 long balls. Jamie Romak, who has only played in 25 games after replacing Danny Worth on May 5, already has 11 home runs.

The Wyverns lead the KBO with 101 home runs. The Doosan Bears are a distant second in that category with 62.

"I don't think I am anxious or anything like that," he said. "But when I look up those players' numbers, I feel like I can be just as productive."

Choi said he has watched some clips from last June, when he was swinging the bat better than at any point in his career, and he's trying to get some confidence back that way.

"I just want to go back up there and see the fans again," Choi said. 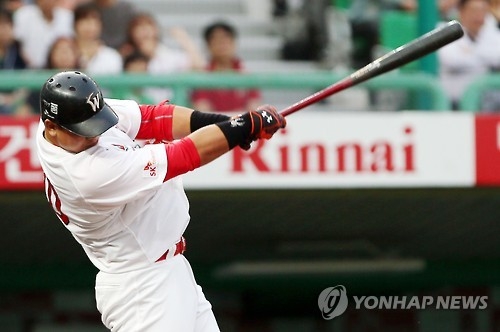