In a mix of urban, motorway and off-road driving that covered 120 kilometers, the G4 Rexton SUV proved itself as a capable and very stable performer helped by its sturdy body-on-frame architecture referred to as "Quad Frame" and 20-inch threads.

Even at speeds hitting 140 kph on the motorway, wind and road noise levels were impressively low in the fully revamped version of the Rexton SUV. Its fuel economy also averaged 9 kmpl throughout the test drive, which is not bad considering the size of the SUV. Built on an all-new, high-strength steel chassis, the G4 Rexton is lighter and tougher than before. It is equipped with a 2.2-liter diesel-powered engine and Mercedes-Benz's seven-speed automatic transmission.

On the road, the four-cylinder diesel engine seemed slightly underpowered to cope with the 2.1-ton vehicle. But it was adequate in delivering power on well-paved roads and running through stop-and-go situations in cities.

The carmaker made additional practical approaches on top of the engine downsizing. The driver can easily switch the functions between two-wheel and four-wheel drive, according to road conditions.

In the four-wheel mode on a dirt track in Yeoncheon, just northwest of Seoul, the vehicle lived up to its rugged look.

The model's suspension -- double wishbone in the front and multi-link in the rear -- absorbed much of the shocks from the wet and rough terrain. 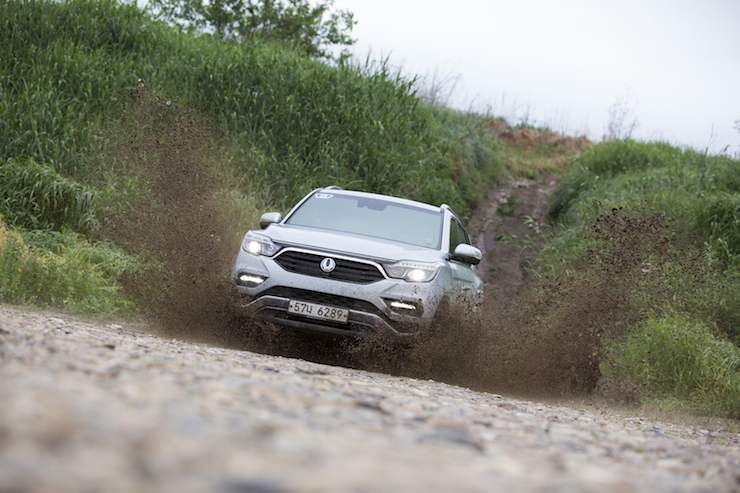 In regards to space, there is ample headroom and legroom in both rows in the five-seater, and the high-set rear seat makes for a very comfortable ride.

There is nothing remarkable about the interior and exterior designs, and getting into the big SUV is still a bit of a climb.

Overall, the G4 Rexton checks all the boxes to become a competent SUV, although with an engine lacking the proper punch and weaker name recognition, it may struggle to match up to bigger rivals.

SsangYong has cited Kia Motors Corp.'s Mohave SUV and Ford Motor Co.'s Explorer SUV as rivals of the G4 Rexton. But its latest flagship SUV lags behind them in terms of horsepower and torque.

The G4 Rexton has a 190 horsepower mill capable of putting out 42.8 kilogram-force meters of torque, while the two bigger rivals with 260-290 horsepower have six-cylinder engines.

Still, the price range between 34 million won and 45 million won for the new SUV is very competitive compared with the Mohave and Explorer SUVS available at prices that are between 8 million won-20 million won more expensive.