SEOUL, June 9 (Yonhap) -- As base hits pile up, KT Wiz outfielder Oh Jeong-bok is growing into his role as the Korea Baseball Organization (KBO) club's No. 2 hitter.

Oh is working on a 15-game hitting streak, which began May 20. In nine of those games, Oh had at least two hits. Through Thursday's action, he's batting a robust .407 (55-for-135), though he doesn't have enough at-bats yet to qualify for the batting title.

Oh, 30, started the season in a reserve role and batted .269 in April while getting only 26 at-bats. But he has since swung his way into the starting lineup, thanks to his KBO-best .432 batting average across 88 at-bats in May. He hasn't slowed down in June, having batted .476 (10-for-21) in six games this month so far.

"I've been working hard to earn my playing opportunity," Oh said before facing the LG Twins on Thursday at home in Suwon, some 45 kilometers south of Seoul. "Even if you're sitting on the bench, you have to be prepared at all times. And whenever I do play, I always try to make a good impression." 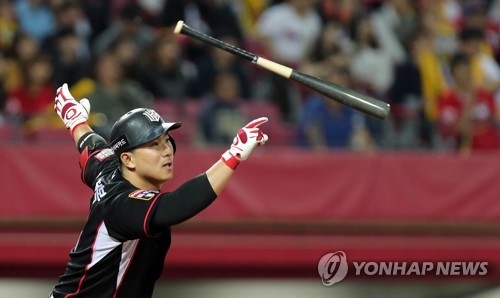 Oh said the key has been to make the team, not himself, the top priority.

"I have to get on base for the next guy to drive me home," said Oh, who also leads his club with a .453 on-base percentage. "And when the runners are in scoring position for me, then I'll have to try to bring them home. I put a lot of work into this, both mentally and physically."

Oh said he has a different approach at the plate than before and has become a more aggressive hitter.

"In the past, I tried to take as many pitches as I could, but that only made me passive," he said. "And when the pitcher came out pumping strikes, I would lose the battle. I decided I had to be more aggressive."

This season, Oh has batted in the leadoff spot and also hit in the third and fifth holes in the lineup. Manager Kim Jin-wook likes Oh's ability to handle the bat and get on base, saying he's a great fit anywhere in the lineup. For now, Oh is the Wiz's everyday No. 2 hitter, behind speedster Lee Dae-hyung.

"I want to grow into a powerful No. 2 hitter," Oh said. "I want to execute plays and drive the ball when it's necessary. But no matter where I hit in the batting order, I want to get ready to become a strong hitter."

Even though he now seems to have a firm grip on an everyday role, Oh said he's not about to relax.

"I still think I have to continue to work hard to keep my job," he said. "My mindset is I have to do my absolute best, regardless of where I play."

In midst of hitting streak, outfielder growing into No. 2 hole

In midst of hitting streak, outfielder growing into No. 2 hole