The Korea Baseball Organization (KBO) team said Rojas agreed to a US$400,000 deal for the rest of the season.

A third round draft pick by the Pittsburgh Pirates in 2010, Rojas doesn't have any major league experience. He has spent eight years in the minor leagues, with 46 home runs, 325 RBIs and 94 steals in 837 games.

In 2017, Rojas, a switch hitter, had been playing for the Gwinnett Braves, the Triple-A affiliate of the Atlanta Braves and posted a .259 batting average with six home runs, 31 RBIs and 13 doubles in 54 games.

The 27-year-old is the son of former major league pitcher Mel Rojas. 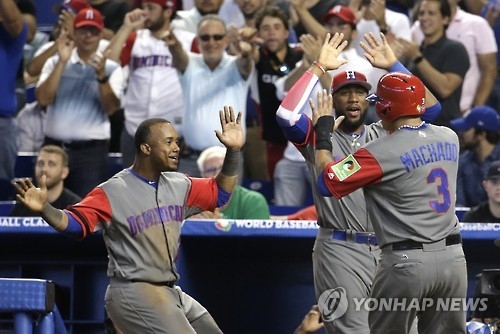 The Wiz said Rojas Jr. is a disciplined hitter with gap power, and his versatility should help spark the offense that's ranked ninth among 10 KBO teams with 251 runs scored.

The younger Rojas was born in Indianapolis but chose to play for the Dominican Republic, his father's native country, at this year's World Baseball Classic (WBC).

In the Wiz's lineup, Rojas Jr. is replacing Johnny Monell, who was cut last month after batting just .165 with two homers and nine RBIs in 28 games.

The Wiz have cooled off after a solid start, and are sitting in eighth place at 24-34 through Thursday's action. They've dropped three consecutive games.