The South's preparatory group said that the two sides have decided to hold separate celebrative events, instead of a joint occasion.

North Korea has yet to invite the South group for a joint summit event, but the group expressed regret over the government's prudent stance over possible approval of civilians' visit to North Korea for it.

South Korea's unification ministry said it will take into account the event's purpose, inter-Korean ties and the international environment in reviewing its approval.

"It is regrettable that the government has not presented a clear stance over its approval," said an official at the agency. "The government should actively take actions to implement inter-Korean agreements, including the 2000 summit declaration."

North Korea has recently turned down South Korean civic and religious groups' move to revive inter-Korean exchanges. Instead, it called on Seoul to implement two summit declarations, made in 2000 and 2007, before it seeks to resume exchanges.

The ministry said last month that the government plans to spur civilian inter-Korean exchanges to an extent that the move does not compromise the international sanctions regime.

There has been no state approval for civic groups' plan to seek contact with North Korea since Pyongyang rejected exchanges Monday. The ministry has approved 15 civilian requests so far since May.

Seoul said it will sternly respond to North Korea's provocations while seeking to revive engagement with the North.

"The international community's adoption of the latest sanctions resolution is a response to North Korea's violation of agreements on denuclearization and continued provocations," Lee Eugene, a vice spokesperson at the ministry, told a regular press briefing.

"North Korea should bear in mind that its nuclear and missile programs will only bring about international isolation and economic hardship," she said. 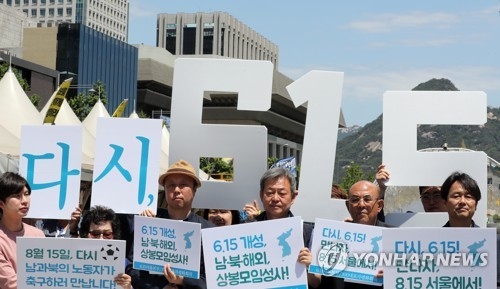