RAS AL KHAIMAH, United Arab Emirates, June 9 (Yonhap) -- South Korean midfielder Lee Jae-sung is not a tactician, but as a player who actually performs on the pitch, he thinks a four-man defense suits the national team better than a back three system.

South Korea, led by head coach Uli Stielike, were held to a scoreless draw by Iraq in their friendly match here Wednesday. The match was a tune-up for South Korea's crucial FIFA World Cup qualifier against Qatar in Doha next Tuesday.

South Korea, No. 43 in the latest FIFA rankings, came up with an experimental 3-4-3 formation against No. 120 Iraq but had a disappointing result with no shots on target. This was the first time that the German coach used a back three system since he took over the national team in September 2014.

"I think we failed to play a good game because we haven't practiced the back three much," he said Thursday. "I think the back four system that we've been playing fits us better."

Stielike has been mainly using a 4-3-3 or a 4-5-1 formation. Against Iraq, he started captain Ki Sung-yueng in the libero role in the back three but switched to his familiar four at the back later in the contest. 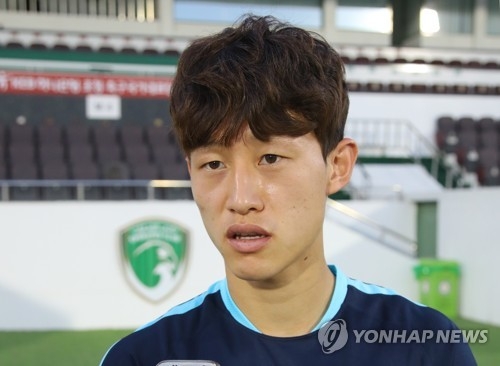 Lee, who plays with South Korean club Jeonbuk Hyundai Motors, said the national team players need to work harder to show what they've been preparing. The skillful attacking midfielder, who has four goals in 20 international matches, said attackers really need to step up.

"We lacked delicate touches and failed to create scoring opportunities," he said. "On defense, we got a clean sheet, but on offense, I don't remember the last time we scored a goal away from home."

The last time Stielike's side got on the board in an away match was June 5, 2016, when they beat the Czech Republic 2-1 in a friendly match in Prague. In the final Asian qualifying round for the 2018 FIFA World Cup, South Korea have yet to collect a win and score on the road.

With only three matches remaining in the final round, South Korea are currently in second place, the last automatic qualification spot, in Group A that also features Iran, Uzbekistan, China, Syria and Qatar. The Taeguk Warriors currently have 13 points, four behind leaders Iran and just one point above Uzbekistan.

In Asia, only the top two from each of the two groups advance straight to the World Cup in Russia, while the two third-place teams have to go through a playoffs for the right to join the other four.

"We have to score goals to beat Qatar," he said. "We need to be more focused when attacking."

The 24-man South Korean squad will depart for Doha on Saturday. They will land in the Qatari capital via Kuwait following a recent diplomatic rift in the Gulf region that forced Qatar into regional isolation.