SEOUL, June 9 (Yonhap) -- Two Korean royal seals from the 16th and 17th centuries will return to South Korea, decades after they were illegally carried out of the country, the Cultural Heritage Administration (CHA) said Friday.

The CHA said that it will soon recover the Royal Seal of Queen Munjeong and the Royal Seal of King Hyeonjong as it completed the confiscation process in cooperation with the U.S. Immigration and Customs Enforcement (ICE), and will put them on public display at the National Palace Museum of Korea in central Seoul in August.

It says the two items are part of the 46 royal seals from Joseon that went missing after the end of the 1950-53 Korean War. 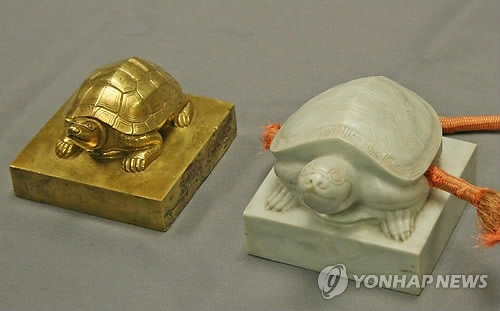 The Royal Seal of Queen Munjeong is a gilt bronze seal made in the second year of King Myeongjong in 1547 to honor Queen Munjeong (1501-1565), the third wife of Joseon Dynasty's 11th king, Jungjong.

The Royal Seal of King Hyeonjong was created in 1651 to mark the installation of Hyeonjong as the crown prince of King Hyojong. The two seals have a square body with a turtle-shaped knob, but the latter one made of jade is slightly bigger.

The two Korean artifacts were unlawfully carried out of the country at an unknown time and handed over to an American citizen living in Los Angeles. He sold the Royal Seal of Queen Munjeong to the Los Angeles County Museum of Art in 2000 while keeping the seal of King Hyeonjong in his possession.

The ICE's Homeland Security Investigations (HSI) seized them in September 2013 following the CHA's request to investigate the circumstances surrounding the two artifacts. In July 2014, the CHA confirmed the authenticity of the two royal seals in the U.S. But it took three years before the items could be returned to South Korea through domestic legal procedures in the U.S.

This marks the third case that the South Korean government has confiscated Korean artifacts illegally taken out of the country, in coordination with the U.S. government, following the first Korean bill issued by King Gojong in 1893 and a set of nine royal and national seals from the Joseon Dynasty and the Korean Empire.

"Throughout the Japanese colonial period and the Korean War, many of our cultural assets have been lost," a CHA official said. "The restoration of the Royal Seal of Queen Munjeong and the Royal Seal of King Hyeonjong is of great significance in that South Korea got back a national symbol in cooperation with the U.S. government."