A total of 1,309 elementary and secondary schools in 27 foreign countries were operating Korean language courses as of 2016, up 88.3 percent from the 695 schools in 22 countries in 2011, according to Ministry of Education data analyzed and released by the Seoul-based Haneul Education Corp.

In particular, the number of Chinese students learning Korean as a second foreign language skyrocketed more than 27 times in the 2011-16 period, increasing from 100 at three schools to 2,741 at 19 schools. 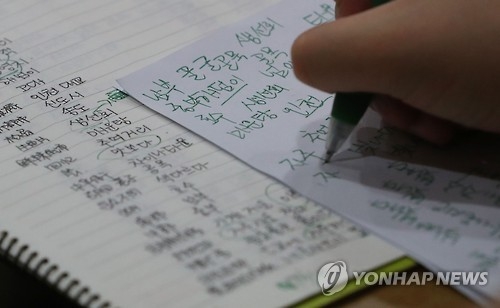 Japan was home to the largest number of elementary and secondary schools teaching Korean at 548, followed by the United States at 155, Thailand at 82, Taiwan at 74 and Australia at 70, the data said.

"The spread of the Korean wave, or 'hallyu,' rising competitiveness of South Korean companies and improvement of South Korea's sovereign status may have contributed to the steady increase in the number of foreign students learning the Korean language," a company official said. "The number is expected to further grow in the future."