SEOUL, June 9 (Yonhap) -- South Korea has no plan for changes to its agreement with the United States that will fundamentally change the ongoing deployment of the THAAD missile defense system here, a senior security advisor to South Korean President Moon Jae-in said Friday.

"Our government plans to deal with the THAAD deployment with a few principles while being fully aware of North Korea's nuclear and missile threats," Chung Eui-yong, the head of the presidential National Security Office (NSO), told reporters.

"First of all, the government has no intention to fundamentally change what it has promised under the Korea-U.S. alliance," he added. 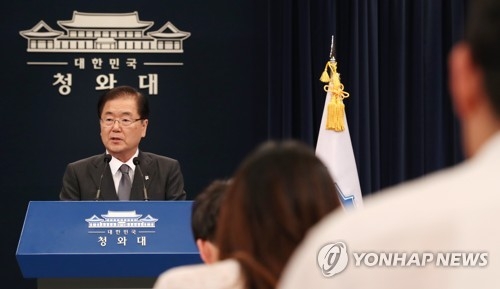 Chung's remarks followed the end of a special probe by the presidential office, which concluded the country's defense ministry had sought to keep the U.S. missile shield safe from a full-blown environmental impact assessment, which would have taken months before its deployment could begin.

A senior Cheong Wa Dae official has also noted the outcome of the probe would keep the still-ongoing deployment suspended for at least months, apparently prompting suspicions in Washington that Seoul's new liberal administration may be seeking to withdraw the former administration's agreement for the THAAD deployment.

Prior to his election last month, Moon had often expressed his opposition of the THAAD deployment, insisting it required approval by South Korea's parliament.

"The THAAD deployment was a decision made to protect South Korea and U.S. Forces Korea from North Korea's evolving threats, and we will not handle such a decision lightly just because there has been a government change," Chung said. "Also, we will continue to closely consult with the United States."

Turning to a scheduled summit between the South Korean president and his U.S. counterpart Donald Trump, the chief security advisor to Moon said the summit will provide an opportunity for the two leaders to form close personal ties based on mutual trust.

"At the upcoming summit, the two leaders are expected to change their views on a wide range of issues, including ways to develop the Korea-U.S. alliance, resolve the North Korean nuclear issue and establish peace on the Korean Peninsula," he said.

Chung acted as Moon's special envoy to the U.S. prior to his appointment. The Moon-Trump meeting is scheduled to be held in Washington later this month.

The NSO chief said Moon and Trump may hold a second meeting on the sidelines of the G20 summit to be held in Hamburg, Germany on July 7-8.

"The president plans to hold bilateral meetings with not only the United States, but also China, Japan, Russia and other Asian and European nations on the occasion," Chung said.